Start a Wiki
Abella is the Ambassador of Prance. She is also the girlfriend of Cryla

Abella is the Ambassador of Prance and grew up in Southern Maris. Abella was enrolled in a prestigious boarding school at a young age and became very interested in the land of Equestria. Abella often dreamed about visiting the distant land and finding her Prince Charming, so she thought becoming a diplomat would be a great opertunity.

Abella is the diplomat of Prance who came to visit Ponyville, and was suppose to be hosted by Cloud Spark. But when Cloud Spark gets food posioning, Cryla steps in to show the mare around. They become good friends over the course of the visit, and Cryla ended up falling in love with her. Before she leaves Cryla tells Abella her feelings, yet Abella leaves Equestria

When arriving in Prance, Abella is informed she will be marrying Prince Blueblood. Abella starts realizing her feelings for Cryla at this point, and while at her wedding, she runs out and takes a plane to Equestria. Upon arriving she finds Cryla and tells her how much she loves her. Abella moved in with Cryla shortly after.

Gold Heart is also very accepting of Cryla's sexuality and thinks Abella is perfect of her sister. 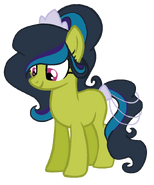 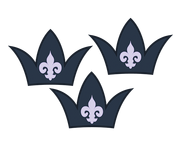 Abella and Her Marefriend, Cryla 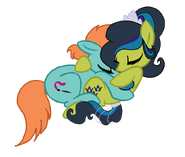 Abella with Baby Paint Drop and Mocha
Add a photo to this gallery
Retrieved from "https://bronies.fandom.com/wiki/Abella?oldid=177541"
Community content is available under CC-BY-SA unless otherwise noted.