Start a Wiki
Adeline Beau is a female unicorn pony, the twin sister of Myra Beau, and a head of the Panies C.S.P. group.

Ever since reading the Sherlock Hooves series, Adeline Beau wanted to become a spy and started to work hard on her detective skills.

When Adeline Beau and her twin sister, Myra Beau, were offered to join the C.S.P. Organization for Unicorns to help in a case by Serina Charades, they immediately accepted the offer, though her sister was shown to be less interested.

Adeline and Myra were both surprised on how well trained Serina's other spies were, but not with the appearance of the headquarters. Later, Adeline and her sister Myra was promoted by Serina for their good work and became the heads of the Panies C.S.P. group.

During her time working for the C.S.P., Adeline became a well respected spy of the C.S.P. and was shown to be more skilled than her sister, which caused Myra to become jealous at her.

Eventually, Myra started to argue with Adeline about being a bad sister and accused her for stealing the glory from her. Despite Adeline's attempts to reason with her sister, Myra refused to stop berating her and got fired by Serina for her behavior.

Soon after, Adeline tried to reason with Myra several times afterward, but to no avail.

Despite her sister's act, Adeline Beau continues to work for the C.S.P. Organization for Unicorns as a spy and head of the Panies C.S.P. group alongside Nicolia Cherubin.

Myra Beau, her 'ex-twin sister' some how found out that Serina was keeping the Crystal Mirror safe for Princess Celestia. Myra made several trips to the human world without getting caught by the CSP but the last time she did, a CSP member did manage to catch her, making her reveal her identity. The next day, Adeline was immediately tasked by Serina herself to retrieve her sister before she could disrupt the balance between both worlds.

After hearing that Twilight can now transport between the two worlds freely, WIP

Adeline Beau is shown to be sweet, caring, and respectful toward other and follows the term "Don't judge anypony by their looks". Adeline also does not think of anyone as "bad", unless it is proven.

Adeline Beau is shown to be skilled in magic and performing various spells. As a member of the C.S.P. Organization for Unicorns, Adeline learned to use a spell to detect lies.

Adeline and Myra Beau were once close sisters, until Myra decided to turn against her and Serina due to her jealousy. Adeline does not wish to fight against her sister or capture her, but understand she must in order to stop her evil doings.

Adeline is one of Serina's favorite spies in the C.S.P. and is usually given the best jobs. They are on good terms with each other, but when talking about capturing her sister Myra Beau, they will sometimes argue.

"Zis iz outrageouz! Why iz my sister like this?!"

— Adeline Beau on a mission and things go wrong

"Why are you doing zis sister?"

In the human world

"What iz zis?"
— Adeline Beau in the human world

— Adeline Beau getting adjusted to her new look

"So, you know a Myra Beau here in zis school?" 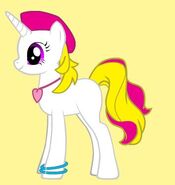 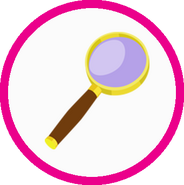 "Serina!" Adeline shouted as her boss was shot at by her twin sister. Adeline gasped at her sister and asked her, "Myra, how could you?!?!" Myra laughed a sinister laugh and told her, "Look, zis is where my loyalty liez now!".
Add a photo to this gallery
Retrieved from "https://bronies.fandom.com/wiki/Adeline_Beau?oldid=184986"
Community content is available under CC-BY-SA unless otherwise noted.