Start a Wiki
Angel Star is a female Ixhelcan Pony who serve Queen Harmonia as a maid.

Angel Star loves to serve Queen Harmonia in the Ixhelca Empire and is often seen with her.

Angel Star is shown to always like her queen. Whenever danger comes, she will act as a guard and protect Queen Harmonia. She is always right here for her to comfort, guard/protect, and to love.

She made a mistake one time, but that doesn't make the queen angry.

She has a good relationship with the queen's daughter. She also guards/protects her a lot. And if there were problems, she always talks to her in a comforting way.

She respects her. When she was a unicorn, she always visits her and borrow her books for a while, Angel loves reading, although she wasn't a bookworm. Twilight also respects her.

Fluttershy and Angel has a good relationship. Angel sometimes gets irritated of her because of her shyness, so she suggested to have a training lesson with Iron Will.

She and Rainbow Dash has a slight friendship. They sometimes argue and boast themselves. Like, Angel doesn't agree being her as a Wonderbolt. And Rainbow Dash thinks she is doesn't deserve to be maid or serving under the Ixhelcan queen.

But sometimes, they show friendship toward each other.

Angel sometimes visit in their barn and taste one of their apples. Applejack make her tastes their Apple juice, Angel drink it, and she likes the taste. She asks Applejack if there is more, Applejack pointed where the Apple juices are.

She canters to that location and started to find Apple juices, but, she drank something by mistake, and that is Apple cider. Resulting was she became "not in herself-like". 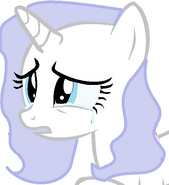 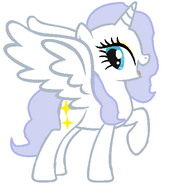 Angel Star as an Alicorn.

Another picture of Angel Star.
Add a photo to this gallery
Retrieved from "https://bronies.fandom.com/wiki/Angel_Star?oldid=148240"
Community content is available under CC-BY-SA unless otherwise noted.