"Put me to the test, I'll prove that I'm strong." -Aoife to Clarence.

Aoife (also known as "The Warrior Princess" and "Mare Heroine"). She was crowned being a princess because of her heroic bravery of saving the Canterlot and proved herself that she is a heroine. But not only that, she performed many heroic actions.

Her name was pronounced, ee-fya.

She is brave and courageous. She was sometimes sweet and gentle, but always tomboyish, selfish, but has a good heart. She has a good cooperation.

Unlike Dark Rose, she hates to see misfortune of others, seeing ponies suffer. Which Aoife is made as an opposite of her.

Aoife was training so she could be used to unicorn magic. Unfortunately, this was interrupted because she saw an insane pony attacking the Canterlot. She quickly galloped to that place.

Aoife questioned the insane pony that why she is attacking the castle, which is named Canterlot. The insane pony ignored her, finally, Aoife knew the reason why, because that pony is INSANE after all. Aoife saw a big rock (which the insane pony throws at Canterlot) but this one is HUGE than big rocks she threw at the castle. She quickly used her magic, and she lifted the huge rock and threw it.

She also lifted the insane pony into jail, automatically, which the police thanked her. And by that, Princess Celestia announced that she will be a warrior princess, because of her heroic bravery and her heroic actions that she performed.

Aoife didn't really want to be a princess, but Princess Celestia forced her, Aoife quickly nodded.

Princess Celestia said rules about her being a princess, Aoife hated rules, but she follows them in order to live in peace, and most importantly, Aoife didn't want to mess things up.

She got her cutiemark when she first done a heroic action when she was a filly, this is how it goes:

One day, in Ponyville, an old mare was trotting, very slowly like a turtle, without seeing by the old mare, a truck is going to the old mare. Aoife saw this and quickly galloped and push the old mare out of the way. Aoife forced herself to lift the truck on the other side.

The ponies saw this and they appreciate Aoife very much. That's when the cutiemark popped onto her flank.

(This was going to be existed in User:Astralfleur's fanfiction/fanfic/stories. This is about Aoife battling the greatest and the evil-est Dark Rose's transformation.)

Aloife's future was that she is now older. She wasn't married yet, just engaged to the handsomely

Her cutiemark didn't change, only her appearance.

She had a foal, named Charmiene Hardaniel, if you are confused whether its Boy or Girl, then its a girl.

Future Aloife ruled the Nature Lands. Because, Princess Cascade will be retiring, while Dark Rose, is thrown away.

Cascade was impressed of her heroic actions. Secretly, Cascade requested to Princess Celestia that she should transform Aoife to alicorn and become a princess. Although she is Aoife's half sister but she still appreciates her.

Aoife sometimes ruins things but Cascade lectures them. Cascade acts like a fine mother to Aoife, although they are only sisters. Cascade is also sometimes is harsh to Aoife but Aoife understands them, she almost ran away when she heard the most harsh speech that Cascade ever said.

Unlike Cascade, Dark Rose is very mean to Aoife. She always mocks her appearance, and etc. She never apologizes to her. And tricks her many times than her sister, Princess Cascade.

Clarence is Aoife's lover or coltfriend. They met at the same place, and birthed at the same place. They're mothers are friends and has a desire to marry each other someday. Aoife declined this since she was a filly, because she doesn't know marriage yet. Clarence immediately agrees, because he knows marriage.

During teenage years, and each day, Aoife's feelings for Clarence is growing. Clarence hopes to be a warrior someday. Aoife wants to be a WARRIOR. They trained themselves together.

Aoife's POV in training is based in the song, Warrior.

In their current years, Clarence train and train so he could be a warrior. Aoife worries this so much, and decides to have Clarence take a break, Clarence declines this and continues.

Clarence have performed many heroic actions than Aoife.

Secretly, Clarence wants to marry Aoife someday, which no one actually knows.

Currently, Clarence and Aoife are separated. Aoife keeps training, and Clarence too.

Aoife still deeply loves Ronin and she is still currently refused to move on with him. When they are fillies or colts, they are childhood sweethearts in their neighborhood.

One day, she is willing to marry him instead of Clarence, she knew Clarence cheated.

"Put me to the test, I'll prove you that I'm strong." -in the upcoming Fanfic, Their Greatest Battle Begins

"Clarence! It's like the first time I see you.." -in the upcoming Fanfic, Their Greatest Battle Begins

"Dark Rose, you are already special. I trained you with your powers, now your going to take revenge?" -Aoife to Dark Rose, in the upcoming Fanfic, Their Greatest Battle Begins part. 1

"Princess Cascade! I missed you already.." -in the upcoming Fanfic, Their Greatest Battle Begins

"Don't worry, my love, we will win this battle." -Aoife to Clarence, stroking his cheek. In the upcoming Fanfic, Their Greatest Battle Begins part. 2

"We must gather allies before the battle start." -in the upcoming Fanfic, Their Greatest Battle Begins part. 2

"My memory refused to separate the lies from truth..." -in the upcoming Fanfic, Their Greatest Battle Begins part. 3

"Ro-ronin? Are you Ronin?" -Aoife to Ronin. In the upcoming fanfic, For The First Time in Forever

aoife as a human. 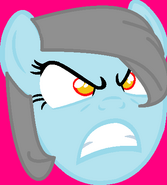 No pony breaks their promise! 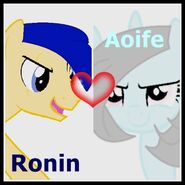 RxA
Add a photo to this gallery
Retrieved from "https://bronies.fandom.com/wiki/Aoife?oldid=184546"
Community content is available under CC-BY-SA unless otherwise noted.