Aqua Illusion is a cheerful and carefree unicorn who can be always counted on to lend a hoof or ear if needed. She's a neutral sort of pony, who's pretty much made her home right on the fence -- she often sees the validity of both points in any argument and has a hard time taking sides! Ironically, she quite enjoys listening to debates. She's also quite artsy with an interest in acting, writing and drawing, but is also a bit of an airhead and forgets things easily. She enjoys getting lost in her own little world.

Aqua had an average childhood... Well, sort of. Her biological father left before she was born, and was raised by her mother and grandparents, even going to live with her grandmother for a few years when her mother just couldn't support the both of them. She's living with her mom again today, with the addition of a stepfather and a younger half-brother. She and Thunder Fall have been best friends since they were fillies. She's grown quite defensive of Cobalt due to the recent fights between their parents, and treasures him above all others. In return, Cobalt idolizes his older sister and wants to be just like her.

Aqua's a little shy, but once she is used to her surroundings she opens up, revealing a hyper and fun personality. This can be taken to extremes when she's around her best friend, Thunder Fall; both ponies tend to get quite silly when hanging out. However, she can be calm and serious when it's needed. Seeing everypony happy is something that really pleases Aqua, so she loves helping the ponies around her out, whether it's just letting them vent or helping them clean up.

However, like she says, there are two sides to every coin.

Deep down Aqua is very insecure and slightly depressed. She's constantly putting herself down and way too harsh on herself. She tends to blame herself when things go wrong and has very little self confidence; this could be the result of having to put up with parents who are constantly fighting. She doesn't want to worry anypony, so she bottles up all her negative emotions and puts on a smile. Occasionally Aqua will snap and let her anger get the best of her, but she always feels bad about it later and does her best to make it up to her victim. She can also be quite blunt and rude when she's stressed out.

Not to say that the smiles and cheer are all lies, though! Aqua is a happy, gentle pony in general, but the conflicts between her parents can really get to her. She thinks of others before herself, and is extremely protective of Cobalt Cruise, her little brother.

A first attempt at a design, made on GeneralZoi's Pony Maker on dA. 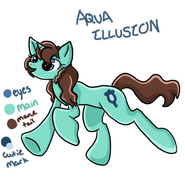 Finalized design, with colour scheme included. Used Moonie-B on dA's pony bases. I'd link them, but for some reason I can't find them! Maybe she took them down? 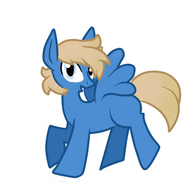 Aqua's treasured little [half] brother, Cobalt Cruise. Unlike Aqua, he is a Pegasus pony. They share a mother.

Aqua Illusion and her best friend, Thunder Fall. Thunder Fall (and this drawing!) belong to Kirara-1994 on dA.
Add a photo to this gallery
Retrieved from "https://bronies.fandom.com/wiki/Aqua_Illusion?oldid=144881"
Community content is available under CC-BY-SA unless otherwise noted.