She is a carefree young pony with a happy-go-lucky attitude. She is known for her sense of creativity and usually writes poems and plays about nature and a knight; she sometimes wishes that her knight in shining armor would come and take her away from Ponyville. She loves sweets and designing clothes and costumes. She is rather bossy towards her older brother.

Aria was born a few months before her parents wedding, about a year or two after her brother was born. When Aria was about the age of a school aged filly, she found her talent in writing and began to rewrite stories that her mother, Nova, told her. She gained her cutie mark during the performance of one of these writings. Aria became so facinated with anything art and quickly became a designer of costumes and writing plays and stories.

Aria became the apprentice of Rarity at a young age and quickly learned not only how to design, but how sew and make the clothes she dreamed of.

Nova- Aria and her mother are very close, similar to that of sisters. Nova is very supportive of Aria's passion for the arts and helps in whatever ways she can.

Eric- Aria finds her father bossy, yet kind towards her; he never spoils her but never gets angry at her. He has attempted to train Aria in the arts of hunting and fighting, but found that it was harder than he expected and soon let her to do what she liked.

Cenehard- Aria finds humor in trying to boss her brother around, but is usually ignored or gets told off in some way. Cenehard finds pleasure in annoying her, but, deep down (really deep down), he cares for her like an older brother should.

Dinky Doo- Dinky and Aria are close friends and are usually together whenever she goes on an outing. They have a relationship similar to that of Pinkie Pie and Apple Jack, in a way.

Berry Pinch- Aria became friends with Berry through Cheerilee because of how alike they are. They both train under Rarity and would up becoming great partners in designing and sewing.

Magic- like all unicorns, Aria is skilled in magic. Her magical aura is a vivid lavender color. Her main talent is using magic to write and create music, as well as make clothes. She can do basic skills like levitation and telekinesis. 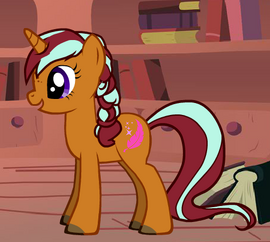 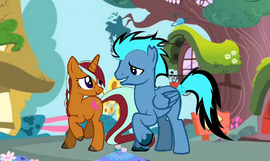 Aria and her older brother, Cenehard
Add a photo to this gallery
Retrieved from "https://bronies.fandom.com/wiki/Aria_Starbow?oldid=128170"
Community content is available under CC-BY-SA unless otherwise noted.