Start a Wiki
Bacon Bits, an adorable bundle of energy that loves (pretty much) everypony

Bacon Bits is a Light-Warm Pink Unicorn, with a single streaked Crimson and Warm Pink mane and tail. She has Crimson coloured eyes. She usually doesn't wear much clothing, but it depends on the weather (eg, in winter, she'll atleast pull on a scarf to keep her warm)

Bacon is made from an endless amount of energy to burn; she gets excited about pretty much everything, and loves, again, pretty much everything. She's very friendly, sometimes a little too much, and will usually out stay her 'welcome' and end up annoying a fair few ponies if she's not careful. Regardless of how annoying she can be, she has good intentions at heart, and doesn't mean to annoy anypony on purpose.

She's been known to enjoy pranking aswell, and will usually play silly jokes on her friends. Bacon's known to be very physical; she likes being nuzzled, and loves hugs.

Due to her endless energy, she loves to run alot; she prefers running around scenic routes, such as dirt roads encased with trees, or long open fields of grass that stretch for miles, and will often practice spells whilst out running on her own.

Bacon Bits has a large amount of unbelieveable power for a unicorn, although her randomness and silly idiocies don't show it very well. She's capable of a variety of magic spells, rather than just a selected purpose for her magic, like most unicorns. Her favourites are usually silly little spells that give her boosts of speed or small amounts of flight to run freely around open fields of grass to her hearts content.

Due to all her energy and enjoyment of being able to run around freely, Bitsy has claustrophobia. She absolutely hates small confined spaces as they make her feel trapped and unable to move, and this causes her to stress severely. If stuck in a small spot, after several minutes of constant freaking out, kicking and screaming, she'll 'run out' of her energy, and faint for a while.

She's also pretty terrified by long amounts of silence. Due to usually spending every day making loud noises and/or being around loud noises, she's easily intimidated by long periods of silence, and will let out a loud scream to break it.

Bacon Bits has no known family up to this point.

"I'm pretty sure I was supposed to be a pegasus, but being a unicorn's cool too!" -Bacon trying to find a reason to explain her endless amount of energy. 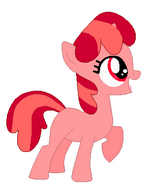 Filly Bacon Bitsy (You can barely see her horn! it's so CUTE!) 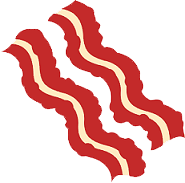 Retrieved from "https://bronies.fandom.com/wiki/Bacon_Bits?oldid=143338"
Community content is available under CC-BY-SA unless otherwise noted.