Start a Wiki
Bass is a kind and friendly Earth Pony. She lives in Ponyville and enjoys making music of all sorts, but her specialty is the violin. She was made by SnowyPonies.

Bass was an outsider and an orphan who used to live in Trottingham. She was freckled in the beginning. Her talent for music arose when she saw a band of ponies playing music. Bass began playing music and got better at it, until she finally earned her cutie mark. Bass eventually escaped Trottingham and went to Ponyville to continue her talents. Her life got better until she wasn't accepted into the Ponyville School of Musical Arts. For that, she began living normal and adopted a tabby cat and named him Cello. Bass ended up living a normal life, she didn't make her made at all. She still continues her musical passion today.

Bass is a light green earth pony with a dark green mane and tail. She has black cuffs and a Treble clef cutie mark. 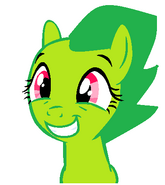 Bass squee(She got pink eyes from being too happy)!

My orignial design for Bass

Bass is ready for the Gala!
Add a photo to this gallery
Retrieved from "https://bronies.fandom.com/wiki/Bass?oldid=76456"
Community content is available under CC-BY-SA unless otherwise noted.