Blossom Heart is an earth pony from Manehattan. She can be a florist sometimes, because she keeps flowers outside her house.

Blossom Heart was quite enthusiastic and bubbly. She tend to sing also sometimes, and tends to dance. She enjoys nature like Fluttershy and always loves animals. Blossom was sweet, caring and loving pony and is popular in Manehattan, but now she resides in Ponyville.

In Ponyville, Blossom becomes a musician and a florist pony, but that didn't continue.

Blossom Heart was also fierce, despite being sweet she is also sometimes tomboyish, even though she looks girly. But she is also has a girly attitude, a heart on her ears, so ponies sometimes is confused.

Blossom Heart has a family, but all of them died. They were in vacation, but when they are going home, they had a train accident and she and the 20 other ponies survived. But somepony took care of Blossom.

If you're looking of the future career of this character, see Future.

Blossom loved her jobs, being florist and being a singer/musician. But she quitted these jobs because she has enough money, and started spending them, causing the money a "little" now or isn't enough anymore.

In an unknown comic, she will have a special somepony and that would be named Exquisite Star, but that pony is a female. But Blossom will have a best relationship with that pony.

Blossom Heart's future career is her being a musician or a singer, and she had 2 children (two fillies) with the pony named, Exquisite Star. They lived happily ever after in her future.

Blossom and Tri's love for each other was quite strong since they were Teenagers. They met each other in the plaza where Blossom was being harassed, but Tri Star saved her from those evil or bad ponies. After that, Blossom fell in love with Tri Star so is Tri.

They've grown up to love each other and made foals (Darkflower and Heart Glimmer) and then they plan to get married each other, but that was cancelled because of Blossom's love for other pony, and she was forced.

Tri Star, who is sad, miserable and furious, decided him and Blossom to be separated or broke up. Which ended Tri Star living with Blossom's eldest daughter, Darkflower.

She and Darkflower has a strong bond. Blossom reminds her of Tri Star because of Darkflower's techniques and skills.

In the age of 12 (teenager), Darkflower decided to live with her father, all that Blossom left was Heart Glimmer. Blossom named her Darkflower because of her dark hooves.

Blossom has an awkward but yet strong relationship with Heart. Even though she can't smile because she was jealous of another ponies, and the reason is they are not perfect family.

Also, in the age of 32 years old (mare) Heart Glimmer was married to an unknown stallion and has already a son. Heart decided to live with Blossom, and with her own family.

Blossom developed a crush on Exquisite since Exquisite started flirting with her. Since they were teenagers, they were best friends. Exquisite developed an "obsessed crush" on her since they met. Exquisite promised Blossom to love her daughter, which is Heart Glimmer.

Blossom enjoys her company. But they were also times that they argue and fight about Tri Star. Because Tri Star hasn't know their relationship yet. ===Princess Cadance===
"If you love somepony, you must let them go."
- Cadance to Blossom.
She and Cadance met where Blossom was crying over her and Tri Star's breakup. She and Princess Cadance get to know easily. 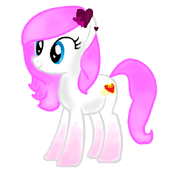 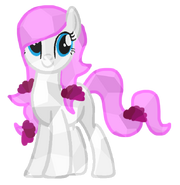 Crystal version of Blossom Heart. Made by Luna 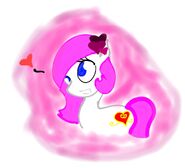 It ish not a fanart, this was made by Astral.
Add a photo to this gallery
Retrieved from "https://bronies.fandom.com/wiki/Blossom_Heart?oldid=181986"
Community content is available under CC-BY-SA unless otherwise noted.