Start a Wiki
Bolt Strike is a male Pegasus pony and royal guard who resides in Canterlot. He is Carmen Descant's boyfriend.

Bolt Strike is a member of the royal guard in Canterlot, serving under Princess Celestia and Princess Luna.

Bolt Strike is shown to be kind, gentlemanly, caring, and very focused in his work as a royal guard. He is also somewhat naive, as he is easily tricked by his girlfriend Carmen Descant, without realising her true nature and motives. 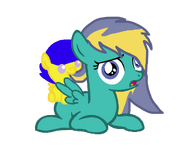 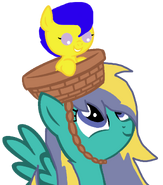 Younger Bolt Strike with Lightning Strike.
Add a photo to this gallery

Retrieved from "https://bronies.fandom.com/wiki/Bolt_Strike?oldid=177563"
Community content is available under CC-BY-SA unless otherwise noted.