Book Star is a pegasus who lives in Ponyville. He is the ponysona of Greenbox (though the real Greenbox doesn't quite stand out THAT much), and he works as a guardian of the Ponyville Library, as well as an agent of an organization called C.H.A.O.S. He has a quantum bond with the Element of Creativity, formed after he ate it.

He is a happy, fun-loving stallion who really loves to read, and therefore is the happiest pony alive if you put a book in his hand. But he is hiding a dark secret - he is half changeling. When he is in changeling form, his personality is much darker. At one point, after being told by Tirek that he had killed many changelings, Book Star replied, "Fear me. I've killed them all."  He then proceeded to pound Tirek to the ground (not literally, of course.). He also might be a little crazy, because he often says, "Of course I don't make cents, the global currency is bits!" when told that he is not making any sense. He hates when people call him his real name, because it more closely resembles "Novelty," and makes him sound popular and "cool," in his opinion. This same desire to be unpopular is what prevents him from ever winning a spelling bee - he refuses to spell "popularity!"

He earned his cutie mark when he was in a library (der!) He had been flying in Canterlot when a changeling showed up with one thought in his head: "Kill the traitor." That didn't work. Instead, Book Star fell to the ground and into a library. An old abandoned library. But the books were all there. The ponies had fled because of the Parasprites that were eating everything. So Book Star, though he could not read, looked through the books for anything on Parasprites (he knew how to spell that) and saw patterns, sounds, understood it all! He suddenly was inspired to think on whole new level, and then - and then, he ran outside. "I NEED A TUBA!" (And I think you all know why.)

Book Star's father, Polar Star, was not happy in Cloudsdale due to the fact that everyone hated them. Book star was the only one who could fly fast out of a mom, a dad, a kid, and some cousins, and no one liked the family's eccentricities and changeling-like mercurial attitude. But his cousin Shada, who built a prison for Time Lords and knew many important ponies, told Celestia that they needed to move, and Celestia recommended Ponyville, because the library needed a protector. Book Star set up a TARDIS that looked like a closet on the outside. But when they arrived by balloon, Book Star had disappeared! He had been having a picnic on top pf the balloon, just because he felt like it! Soon they moved in, and everyone had soon made lots of friends - but Book Star. On his 5th day, he saw Applejack for the first time. On his 8th, he went to school and saw all the Mane 6 (except Twilight), who at the time didn't even know each other. But it wasn't until later that he started to make friends....

Book Star met the Doctor at school. At the time, check out the 3rd Doctor Whooves image from the episode Sweet and Elite to be found on his MLP Fan Labor page for what the Doctor looked like, though he was a colt. He showed Whooves some machines like a sonic probe (well, the Doctor had to get the idea somewhere!) and a Dalek (man, those things are annoying.) He learned from Whooves the secret of regeneration (you can tell which one used it more.) They figured out time travel and, well, let's just say the Sphinx had to blow his nose when they got stuck up it, and there weren't always just 5 allicorn faces on Mount Flanksmore.

When he was only a colt, he entered law, and he won cases as Applejack's lawyer, Maud Pie's, The Cakes', Doctor Whooves's, Candy Storm's, and his own, as seen in "And So I Rest My Case."

He is a stallion with a red coat and a brown mane. His cutie mark is a brown book with a yellow 8-pointed star on its cover. He has big grey eyes and changeling fangs. He has freckles and moose antlers.

He has a build like a changeling and his eyes are entirely white. He now has a horn and changeling wings, and his legs have holes in them.

His mane is neat and he is all grey. He has no fangs or moose antlers.

He is in his changeling form, but with normal eyes and no wings or horns. He cannot shape-shift at all.

He wears a sort of steampunk outfit, which everyone makes fun of. He is a rather tall human teenage boy, and his cutie mark is on a patch on his shoulder. He has claws and no fangs.

He somehow manages to be exactly the same, but evil and a psychopath. His left antler is a bull horn, and his fangs are longer. He does not have a whole body like non-changelings do. He has a tendency to misinterpret things.

(Dr. Hooves) Excuse me? That was rude.

(Reflections Book Star) No way. I'm not "rude," as you so bluntly put it. I'm a psychopath.

(Dr. Hooves) But your antlers, in any case -

(Reflections Book Star) Antler. Singular. When did you get so bad at grammar, Doctor?

He can read almost anything, no matter what language. He can also make books function as portals to travel from place to place.

He is a little faster than most ponies. He has a speed trail. It is red and black with an orange spiral around it, and often is jagged, due to the fact that he flies "worse than a bat", according to Rainbow Dash. It has small yellow stars in it.

He is not seen to be able to shape-shift, at least not very well. He tried to turn into Nightmare Moon to confuse her, but the color scheme came out wrong, and he still had his own cutie mark. Also, he still appeared to be a stallion, rather than a mare.

He has a Book Sense, similar to Pinkie's Pinkie Sense. However, his tail always flaps when it activates, and the rate of flapping tells him what to do to stop something bad from happening in the near future. Once he got up in the middle of the night, hitched a plow to a fallen tree, and pulled. Then he untied the plow and stuck a peg into the ground, which he fastened the rope to. Turns out, Angel the bunny was trapped underneath. If it were not for him, Angel would have been dead when FiM started!

His father is named Polar Star, and his mother is Mindplay, so named because she is a social worker who works with foals.

Best friend, lab partner, etc. They ran into each other in 1st grade, and the rest is quite literally history, seeing as they invented a blinkin' time machine.

Not best friend, but a friend. They met him in the 16th century, and he was unable to earn his cutie mark. He said he knew what he was destined to be, but those blasted Puritans thought that parties were unholy, and that God disliked loud celebrations. They took him to their time, and almost immediately he began starting the best parties and making the best candy in all of Ponyville, and that's how he got his cutie mark - three candy canes. He is also rather crazy, and reacts to Book Star's craziness with more craziness.

A good friend of Book Star, ever since he became good.

Great kid, actually. Hey, if you're an eccentric pony with the Element of Creativity in your stomach (yup, he swallowed it), Apple Bloom seems like a nice kid!

He likes Applejack, but Applejack prefers to stay a mile or two away from him.

Uneasy friends. At one point Pinkie liked Book Star, but then the whole changeling thing came to light. Book Star had to explain that he did not eat what changelings normally eat, and it is perfectly safe to be friends with him. He does eat some weird stuff though.... bratwurst, anyone?

"No, it's not impossible. Simply far outside of the normal spheres of pony comprehension."

"I suppose that if I ask you why you want so many bits, you'll say you'll tell me if I've got bits. Therefore, since I haven't got any bits, I won't ask, it would be futile."

"Now, now, Discord. Do you really think I never had to deal with friends abandoning me growing up because I'm so different? If you could trick me out of creativity like that, I wouldn't have the Element of Creativity, now would I? Think of that before you try to trick me again."

"French fries with ketchup, and a double oat burger, please."

"Horns! No, one horn, one antler! Long thin body, mixed-up legs and wings - I'm a draconequus! NO WAY! I can't be a draconequus!"

"Not a scuba, a tuba! Your sign says Pool and Orchestra! All you sell are scuba gear and violins?"

"Is there any reason to be running away from that? If it's a skeleton, it can't hurt you, it's DEAD!"

At first he was supposed to be Twilight's brother, and permanently look like a colt. Eventually, the "Colt forever" concept was scrapped, then the relation to Twilight. His Element was going to be Understanding, but that was scrapped and given to Deltora Rex. The bratwurst craving was added at the final stages, as were the fangs and the antlers, and the ENTIRE BLASTED COLOR SCHEME! His original design was indigo with a black mane, and a gold stripe. Later prototypes had a star instead of a stripe, or the mane and coat reversed, or the book open with stars on its pages. At one point, he was grey, with curly grey mane and a neon green star in it! However, this was after the idea about him being a colt was scrapped. 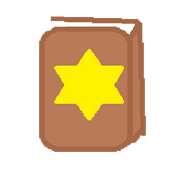 as a foal in "And So I Rest my Case"
Add a photo to this gallery
Retrieved from "https://bronies.fandom.com/wiki/Book_Star?oldid=176227"
Community content is available under CC-BY-SA unless otherwise noted.