Brushstroke Bauble can best be described as happy and childish. He loves playing small jokes on ponies and seeing their reactions, but his true passion lies in toymaking, as evidenced by his cutie mark.

Brushstroke loves to laugh and loves it even more when other ponies laugh with him. He's a notorious flirt, and will hit on anypony within range. To him, it doesn't matter if they're mare or colt, just as long as they're cute and willing to put up with him.

He has been known to be a bit of a space case, and can often be found lost in thought

about important subjects such as "Could Captain Equestria beat Iron Mare in a fight?"

"He" is now a filly, but seems to be ok with it and enjoying herself in her new form.

Brushstroke always loved making his own toys, but he always kept them to himself, afraid to show his talents off to the world around him. It wasn't until he gave his handiwork as a gift to one of his childhood friends, that he knew it was his true calling in life and his cutie mark appearred.

He recently became a filly thorugh magical means and currently remains one. 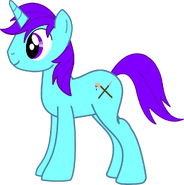 Brushstroke's original form.
Add a photo to this gallery
Retrieved from "https://bronies.fandom.com/wiki/Brushstroke_Bauble?oldid=23349"
Community content is available under CC-BY-SA unless otherwise noted.