bubblegum is a pony with a curse or a spell (its unknown what happened to her) put on her. bubblestrike's parents were two alicorns that were killed when discord was still ruler of equestria (no not the episode before that lol.) the only survivor of her family was her sister eclipse (i know that name gets used alot) who was staying at her grandparents who live in a small house far away ponyville or ponys. but before coming to equestria discord froze the house in a ice that stops the aging process so when eclipse came back she was still a child. bubblegum is said to be slowly going insane from the spell and from seeing her mom and dad die but has gotten help so that if it happens it happens close to death.

when bubblegum was young she was a always happy and very nosey filly she didn't care if it looked dangerous she just when right at it. on sunny days bubblegum always took a walk around ponyville and when she saw a big flying snake thing (thats what she said it was as a filly) like i said went right at it her parents saw her following it and told there was a draconequus outside and to get inside quickly she yelled WHAT?!? and the next thing she knew her parents were on the ground. soon after that electric pain shot her and she fainted. some times she could hear screams and things she couldn't describe after who knows how lone she woke all that

was left of ponyville was a few houses ponys and ashes her mane and tail was now striped she saw two alicorns fly away and a statue of the thing that killed her parents. she yelled so loudly at the two that the houses and ponys shook COME BACK!!!!!!!!! they came back and she told them what happened to her

they said until ponyville was repaired that she could stay with them the alicorns called themselves Celestia and Luna. when ponyville was back to normal she was adopted by a yellow pegasus named phoenix (who was a babysitter) and her brother timber fire.

the spell put on bubblegum also gave her the powers of a unicorn and a dracone quus she got her cutie mark when she used her magic for the first time she made a bubblegum bubble that when shocks you when you pop it.

bubblegum is very paranoid and shy she doesent even like comeing out of her house most of the time.her parents were alacorns yet shes a earth pony and her sister a pegasis because of a birth defect. bubblegums magic is mostly used for picking stuff up because too hard for bubblegum to use it at the moment since shes not a unicorn and this isnt really unicorn magic.

bubblegum is happy she has a family and ponyville is back to normal at times she can still freakout but she doesn't do it as much. 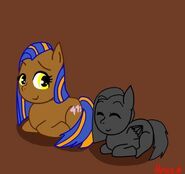 drawing made by Hanna

bubblegum wallpaper
Add a photo to this gallery
Retrieved from "https://bronies.fandom.com/wiki/Bubblegum_strike?oldid=18295"
Community content is available under CC-BY-SA unless otherwise noted.