CamShaft is a female Pony of the Bat Pony Tribe. She is also seen as a normale Pegasus Pony because she has a Bracelet that give her a normal looking. Her Cutie Mark is a CamShaft and her specials are Motors and High Speed. She Works as one of the Night Guard of Equestria.

As a Pegasus Pony CamShaft looks like a normal Pegasus with a [Moderate Orchid] Coat and Hair. The Hair has on Mane and Tail are also in [Moderate Fuchsia] and [Very Dark Magenta]. On the left Front Hoof she wears a Bracelet. This Bracelet is a magical Item that gives her a normal Pegasus look and features so that she can live a normal life among the other pony species. Here Wings are some lager than the most Pegasus Ponys.

As a Bat Pony looks like other Bat Ponies with a [Dark Heliotropeish Gray] and Bat Wings. Her eyes have a Cat like Iris and like the Pegasus Version a [Luminous Vivid Blue] Colour. the Mane and Tail Colour are the Same as her Pegasus Version.

The Bracelet is a Item that all Members of Her Familie have to live among the normal Pony Tribes. it was Made for Long time and looks for Others Ponys like a simple Jewelry. It has some engraving lines and a little Moon on it.

Sleeping on a Cloud 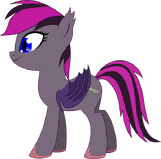 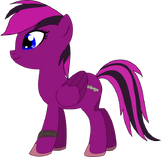 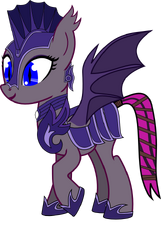 Night Guard Version
Add a photo to this gallery
Retrieved from "https://bronies.fandom.com/wiki/CamShaft?oldid=121744"
Community content is available under CC-BY-SA unless otherwise noted.