A cyan pegasus with cornflower and orange hair. Wears a dark cyan hat which is
cover in yellow glitter,making it look like stars in the night sky. Sometimes wear
A blue and yellow glitter scarf or cape.

When Chelly was young, she was abandoned by her parents and she had to live on her own. Then she started to travel. During a blizzard, Chelly was trying to find a town to stay for while because she was hungry and cold but she passed out before she could make it. Then she was found by two ponies and since then she was taken care of and was healthy once again. She classed these two Pegasus as her parents. Then they moved into Cloudsdales to live there and still living there. She sometimes goes to ponyvill to meet some ponies and make new friends.

Chelly has a crazy side from being abandoned for too long. The way to trigger is to keep her alone for a long period of time.

Chelly real hair color is white but somehow her hair turns from white to cornflower blue. She dyes some orange high light in her hair.

Once, Chelly went to her crazy side but was helped by Pinkie pie. 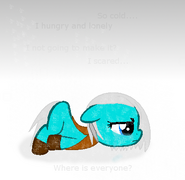 When Chelly is all alone 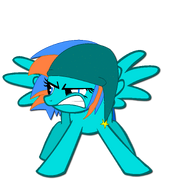 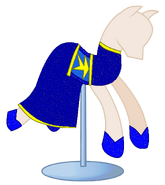 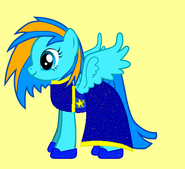 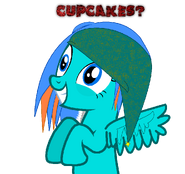 Chelly crazy's side with a reference

Chelly with her scarf

Chelly with her cape and a background. The picture was made by someone else so thank to them

Retrieved from "https://bronies.fandom.com/wiki/Chelly?oldid=22314"
Community content is available under CC-BY-SA unless otherwise noted.