Cherry Scribble is a unicorn pony who lived in the frontier lands of Equestria and is a member of the Frontier Friends . Her step brother, Sabregust , was posted to Ponyville after an attack on her hometown, Windtonvale , which nearly lead to the capture of both her and Princess Lorikeet . Cherry Scribble tasked herself to help Sabregust by assisting him on his adventures in Ponyville and beyoud, and to help Sabregust find out about his past.

Cherry Scribble was born to Lectern and Orchid Fields in Canterlot. Her parents were both Unicorns. When she was 2 days old, she moved to Windtonvale because her mother got a job as a botanist & RFF medical officer in Windtonvale and her father as a military professor in nearby Gallopsburg. She went though school as a happy, bubbly pony which always loved a party, but was one of the last ponies to get a cutiemark, though, she was never teased for it.

One day after school, she saw a bundle near the town hall. Curious, she inspected it and found inside a little colt, barely a toddler, looking at her in wonder. She told her parents and they decided to adopt him on behalf of the Windtonvale Council. He was a Pegasus with cyan coat and gold and green mane. Based on a letter found on the colt and his cutiemark, which already existed at the time, he was named Sabregust and put into the care of the Scribble family.

Cherry had the objective of teaching the young colt before he went to school. After school, she tried to teach him stuff she learnt in class, but the colt didn't understand, and wondered off to fly somewhere, which scared Cherry, thinking he could hurt himself. One day, her mum brought back her favourite fruit, Snow Cherries, growing deep in the forests below Windtonvale during winter. Cherry decided she would teach Sabre the difference between a Snow Cherry and a normal Cherry. Sabre tried to eat a cherry but started to choke on the pit, and Cherry Scribble had to make him cough it out. She tried to describe the differences, but Sabre didn't understand. Cherry was about to scream and rage when she realised that he is too young to understand, and she must be patient to teach him. She got out her favourite toy, a little blackboard, and drew a cherry on it. She pointed to the image and then to the snow cherries, and said to him calmly that the red ones have little pits in it, whilst drawing a pit, and the snow cherries don't. Sabre looked at her, then went and ate a normal cherry. Cherry was preparing to stop him from choking, but he spat out the pit into the sink. Cherry celebrated her success and as her parents came to see what the noise was about, a rough sketch of a cherry appeared on her flank and she knew her job was to teach fillies and colts with her new-found patience.

Cherry Scribble finished school and went to Manehatten for 1 month to study teaching before coming back to Windtonvale as a teacher to take over from the previous one. She taught Sabregust , Glimmer Beam , Scope , Ratchet and other ponies in that cohort and became a member of the Frontier Friends . She now teaches Princess Lorikeet in her respective cohort with help from Sabregust.

Cherry Scribble is known for her teaching skill, particularly in first aid and with fillies, relating and getting a positive reaction out of them very easily. Her students find her patient with them and very caring to them, allowing them to learn a lot about their world and their duties. Her main skill as a teacher is drawing images and sketches, which help the fillies understand the topic better with a visualisation.

'Don't mess with me, kitties!' - Cherry taunting her enemies

Cherry Scribble is a reserve soldier for the Royal Frontier Force as well as a teacher. Her main role as a reserve is to be a medical officer on the field, a skill coming from her mother's ability to make remedies from plants, which that skill was given to Glimmer Beam. She became the official medical officer after Glimmer's parents left for Baltimare, but she is also extremely profient in close quarters combat, being able to buck 10 targets in 10 seconds, with a distance of about 10 metres each.

Cherry Scribble is extremely patient with fillies and colts, and as well with mares and stallions. She is known to be steadfastly waiting for you if you need help. She prides in taking her time to make sure that her students are able to learn to the best of both of their abilities. However, she is not naive, and will be hard and impatient on those who deliberatly test her, but for everyone and everything else, she would be patient for them.

'Watch out! It's the Party Pony!' - Scope quoting Cherry's love of fun

Cherry Scribble likes to make everything fun. Everything must be fun and enjoying for her, otherwise she would make it fun. She is almost the Pinkie Pie of Windtonvale and loves to be in a party with her friends. However, she can become slightly annoying with all her partying, particularly to the no-nonsense ideals of Scope.

Cherry Scribble is commonly considered an eccentric. She is very bubbly in attitude and commonly says random and odd statements that make her students laugh. Despite her apparent 'oddness' according to her rivals, ponies enjoy her company.

Cherry Scribble represents the element of Patience, because of her skill to just take her time to help other ponies succeed. Her particular ability, which is strange, is to enter a 'bullet time' state, where everything around her is moving slowly, but she can only do this for 5 seconds. Her element is in the shape of a Snow Cherry.

Sabregust : Sabregust is Cherry's adopted brother and because she had to teach him, they considered themselves step-siblings. Cherry is very protective of her brother but as a teacher, sometimes it's difficult to stand up for him without being called a favourist. She finds Sabregust a strong leader, a loyal friend, a bit of a troublesome brother when he just flies off and a bit of a shy pony.

Glimmer Beam : Glimmer Beam is a former student of Cherry Scribble and a friend of Cherry. She finds Glimmer a caring, helpful and cooperative pony, but also finds her very shy and introverted.

Ratchet : Ratchet is a former student of Cherry Scribble and a friend of Cherry. She finds Ratchet as a hardworking and steadfast pony who has a mind of genius, but he find him very messy.

Scope : Scope is a former student of Cherry Scribble and a friend of Cherry. She finds Scope as a forgetful pony, always with his head in the clouds but when he focuses, he is very vigilant and wakeful.

Mane 6: Cherry Scribble met the Mane 6 when she came to visit Sabregust in Ponyville. She made a quick friendship with Twilight Sparkle, who share their knowledge and Pinkie Pie, because they both love to party.

Cheerilee: Cheerilee is the second cousin of Cherry Scribble and her inspiration to be a teacher. She finds Cheeriliee a teaching genius and a very happy and caring teacher. She idolises her even though Cheerilee sees it as no big deal. 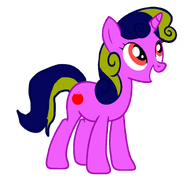 You have made Cherry very happy! Image by User:Lunaflaire 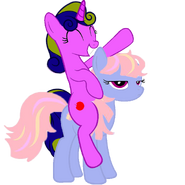 The Frontier Friends! Image by User:Lunaflaire
Add a photo to this gallery