Clover acts as if she were born yesterday, or perhaps more like she's from a different planet. She greets everypony with a smile, and refuses to see any bad in them unless they prove it thoroughly. She also takes pleasure in the simplest things, like the feel of the dirt under her hooves, and the changing of seasons. When it comes to actual earthly issues, she has no idea how to cope, but seems to think that if she keeps acting the way she always does, the problem will disappear. Unsurprisingly, this oblivious mindset rarely helps. She can be shy when meeting somepony new, but she adapts quickly, and usually treats them like an old friend within the hour. While willing to accept the unfamiliar when she encounters it, she certainly seems to go out of her way to stick to what she's always known - change scares her.

She can't ignore teasing - it either makes her sad or mad, depending on the circumstances, but it always has some effect, because she tends to believe that whatever they're saying is true. Her wings freeze up at the slightest bit of nervousness, and she refuses to fly very high anyway. She's also very, very naive, and because of this, exploitable. Her kindness, mixed with her overly trusting attitude, often has her helping the wrong ponies.

Clover Quill was born in Cloudsdale, after a complicated process that had quite a few doctors running around on edge. She was born late, and rather frail, but she made it - the luck of this inspired her name. Due to a respiratory problem, however, staying up in the clouds gave her fits of coughing at the slightest exertion. At first, this was handled by keeping her indoors, in a draft-less, heated room. Her mother also gave her a scarf, which continues to protect her from the elements to this day. However, she couldn't stay cooped up like that forever. By the time she was a year old, the family had moved to Ponyville.

Despite both her parents' encouragement, Clover never took to the idea of flying. She had trouble when she went too high, and hovering felt unnatural at this point. She much preferred the ground - it felt wonderful under her hooves, and she often ended up digging in it out of boredom. When she learned the concept of seeds, she gave gardening a try, and she turned out to be amazing at it. Fittingly, she found her cutie mark while growing a patch of clovers.

She now spends most of her days tending to her garden, sometimes helping others with their plant-related problems as well. She's still young, and she doesn't see any need to rush - she's fine with her life staying in the same routine for a long time.

Note: Clover is an independent character for use in roleplays, fics, et cetera. She bears no resemblance or relation to her creator or anyone they know. When posted in an environment that is not specifically for roleplaying, she is merely for aesthetics. 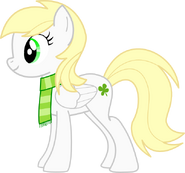 Clover by InsanelyZanter on dA

A mostly human version of Clover, by Steeve on Ponychan 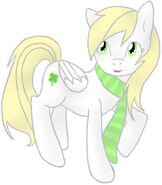 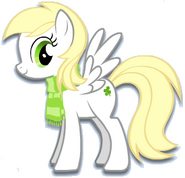 Clover in Adventures in Ponyville 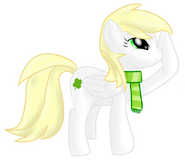 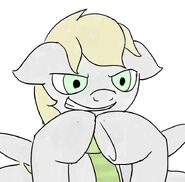 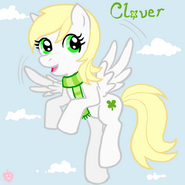 Clover's not that great at flying 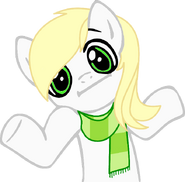 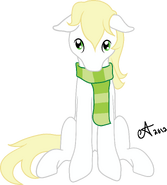 Clover by Choco on /art/

A sketch of Clover in the snow

What's going on in this wik- 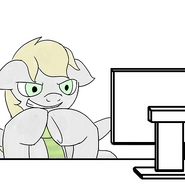 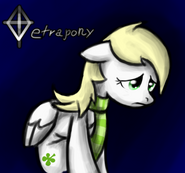 Sad Clover is sad.
Add a photo to this gallery
Retrieved from "https://bronies.fandom.com/wiki/Clover?oldid=86091"
Community content is available under CC-BY-SA unless otherwise noted.