"Find out where my sister lives now, what is doing, and how many friends she has. After that, we will attack!"
—Dark Sparkle

Dark Sparkle is a white unicorn, the sister of Twilight Sparkle who first appeared in Zonoya717's Fan-fiction Dark Sparkle Returns in chapter 1 In this chapter she remembered the events from her past:

Dark Sparkle was very kind and she very loved her sister and Celestia. They was her best friends. But now, they're not. Now they're her enemies.

Dark Sparkle likes her servants, but she said that they're just servants, no more, no less. They're just must do her quests, and that's all.

First she appeared in the story, called Her Darker Side, where tells about her past, and then she appears in Dark Sparkle Returns, where she returns to consume her revenge. 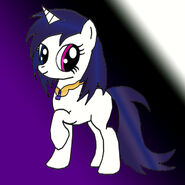 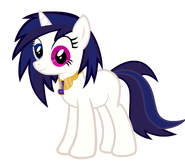 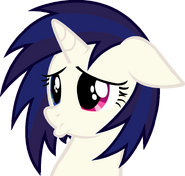 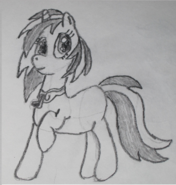 Add a photo to this gallery
Retrieved from "https://bronies.fandom.com/wiki/Dark_Sparkle?oldid=168823"
Community content is available under CC-BY-SA unless otherwise noted.