Daydream is a pegasus. She was born and raised by her parents in Coltombia but now she is currently living at Ponyville. Her body is pale yellow and her mane and tail is brown with a few highlights. She usually wears large black bow on her head and a pair of black flats on her front legs. Her eyes are a beautiful purple color which are said to be filled with joy. Its very common to see her wear a smile on her face as she passes by. The cutie mark on her flank is a pencil writing on a small thinking cloud.

Even though she is a pegasus, she spends most of the time on the ground, usually wandering around, humming a song or lying somewhere scribbling on a small notebook. One of her favorite places is Ponyville's Library. Here is where she met Twilight Sparkle. Sometimes she can spend hours talking to her about books or telling her to read her newest ideas. One of her most precious objects is the pencil that Twilight gave to her when she first arrived to Ponyville. She rarely uses it, and when she does, its because she had a great idea.

Daydream's cutie mark is a pencil writing on a thinking cloud. This represents how she loves to write and how her stories are usually based on her dreams (or, as her name demonstrates, her daydreams). It is believed that her cutie mark appeared when she won a creative writing contest at her school. Her submission to the contest was a description of her favorite place, in this case, her home. The idea came to her one day, when she was lying on a small cloud. She dreamed about her home and how incredibly gorgeous and warm it was, and decided to write about it before the mental image vanished away. The judges of the contest were amused with the great talent of the young filly and decided to award her with the First Place. Daydream was so surprised that the shock caused her cutie mark to appear. She won a visit to Cloudsdale with her parents and ever since that day, she has been dreaming about writing of the places she has gone to and the adventures she had in each one of them. Whenever she is asked about how she felt by winning such an awesome price, she smiles and says:

"I don't think the trip to Cloudsdale was the real prize. For me, it was getting my cutie mark."

Daydream is very innocent and easy going. She can be very random and crazy sometimes, but when one of her friends is hurt by somepony else, she gets very angry and takes it as a personal offence.

She is shy when it comes to meeting new ponies but once she feels comfortable she can be very social. She doesn't consider making friends a hard task, but she enjoys being alone, especially when she is working on a new story or seeking for some inspiration. She is not mean spirited; in fact, she likes to offer a hoof whenever somepony needs help.

Some days, she spends the whole day with a blank face, deep in concentration, organizing all the ideas on her mind. She doesn't speak much and she only opens her mouth when its time to eat. However, once her mind is clear, she returns to be her jolly normal self, and she skips around town looking for something to do.

Daydream recently moved to Ponyville after living in Coltombia during her entire life. She made this decision after realizing that she wanted to chase her dreams of travelling to different places and writing stories about her journey, what she's seen and who she's met. Her parents, filled with worry, tried to talk her out of this idea but Daydream, being the dreamer she is, insisted on doing it. Once her parents accepted the idea that their little pegasus wanted to leave the nest, they began helping her to look for a good place to go to. It was then that the news of everything that had happened in Ponyville reached her listening ears. She heard about Princess Luna's return and Discord's defeat, making Ponyville her desired destinations. Her parents got worried once again. Daydream told them that everypony needs to take a few risks every once in a while and now it was time for her to do so. She promised that she would be very careful and that every week she would send them a letter with any updates or stories she wanted to share. Her mother's eyes began to fill with tears and her daughter watched as they slid down her cheek falling to the cloud floor where she stood. Daydream hugged her really tight and assured her that she didn't have to worry at all. Her mother ran to Daydream's room and came back with Daydream's favorite plush toy. It was a small white bunny, who on his nose had a big fluffy brown mustache. Daydream looked at the small object with teary eyes and back to her mother. Her mother hugged her once more and told her daughter that whenever she felt homesick or in need of a hug, then all she had to do was to snuggle with the little bunny and remember that wherever she went, her caring parents would always be there for her. After all the tears had been shed and all the childhood memories and belongings had been packed, Daydream felt prepared to begin a new chapter in her life. A couple weeks later, Daydream began her way over to her first destination: Ponyville.

After settling down in Ponyville, Daydream decided that it was a good time to go over to town and walk around, maybe even meet some new friends. She visited Sugarcube Corner where she met a rather insane earth pony called Pinkie Pie. She introduced herself and then asked for directions to some interesting places in town. After a long moment of Pinkie's incessant ramblings, she decided to head towards Sweet Apple Acres, where she met the Apple siblings and one of her favorite fillies, Apple Bloom. When Daydream felt that she had had enough apples for the day, she started her way towards Carousel boutique. There Rarity was apparently torturing Rainbow Dash by forcing her to pose with a few of her newest designs. Scared of what might happen next, Daydream began to back up towards the door with such bad luck that she bumped with Fluttershy who was entering the boutique. Day and fell face first into the ground. The noise made Rarity to turn around and Rainbow Dash to laugh. After apologizing over 20 times, Rarity told Daydream that it didn't matter and she offered to show her around the boutique. Rainbow Dash also apologized for laughing. Daydream laughed it off and accepted Rarity's proposal. They talked for a while and Daydream tried on a couple dresses. She bought some black flats and thanked Rarity and Rainbow Dash for such an amazing time. Tired of such a long day of walking, she used the last bit of strength she had to fly over to her new home. Once she got there, she snuggled on her comfy, fluffy bed next to her plush rabbit and she fell asleep, letting Luna's dark night and pale moon embrace her dreams.

The next day, Daydream woke up knowing where she was heading to. She flew off from her house and began to fly over to her favorite place in the world and her second home: the library. Once she got there, she stopped at the door and took a deep breath. A wide smile appeared on her face and she stepped inside the big tree library, letting the familiar warm feeling settle down on her heart. The smell of old pages, the tall wooden bookshelves, and the scattered books on the floor officially welcomed her home. She closed her eyes and let her mind carry her away. She remembered all the time she spent on her father's library at home, reading one book after another, passing endless numbers of pages, filling her little filly brain with lots of information and stories. Somepony clearing her throat made her snap out of her daydream and wake up on reality once more. There she found Twilight Sparkle looking at her with a puzzled look. Daydream blushed and told her that she was new at Ponyville and being in the library reminded her of home. Twilight smiled and welcomed her to Ponyville. She gave a tour of the library/house to Daydream. Amazed with Daydream's knowledge on pony literature and noticing the cutie mark on her flank, Twilight asked Daydream if she liked to write. Daydream told Twilight about her cutie mark and how she had a special talent for writing. She even told her about her crazy dreams about becoming a great writer. Twilight told her that it was actually a great dream and that she should follow it, then she went up to her room and returned holding a pencil on her mouth. Daydream held her hoof up and Twilight placed it on top of it. The pencil was a shimmery purple color and had silver shooting stars on it. Twilight shrugged and told Daydream to consider it as a welcome gift. The pale yellow pony smiled and thanked for the gift. For her the small object was more than just a simple pencil, it also symbolized the beginning of something awesome; the beginning of a friendship.

Daydream works as a journalist for the "Ponyville Post". Sometimes the head publisher of the paper publishes a few of her stories and she gets really excited. It doesn't bother her that its a small publication as long as someone reads it. She hopes that one day; an important publisher will read one of her stories and hire her as head journalist. 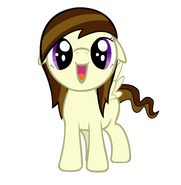 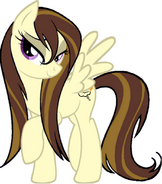 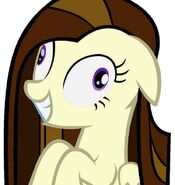 Add a photo to this gallery
Retrieved from "https://bronies.fandom.com/wiki/Daydream?oldid=22918"
Community content is available under CC-BY-SA unless otherwise noted.