Diamond Gamer is a daring and annoying ice blue female pegasus from Trottingham. Diamond lives in Ponyville with her sister, Xethon Skull. She is the arch nemesis of Starlight Clickster. Diamond is part of the Elements of Love and wields the Element of TBA.

Diamond is often rather annoying towards her friends, to some ponies it seems a wonder that she even has any friends as Diamond is often the first to start bickering amongst the group. Diamond has a very "Treat me the way you wish to be treated" attitude, and sometimes lets this get the best of her.

Diamond's coat is an ice blue colour. Her hair is a neon pink colour, her mane is styled with bangs at the front that curl over and around, there is a little flick of hair behind her ear and the rest of her mane gracefully swoops down her neck and curls over. Her tail is a little more messy however.

Diamond grew up as a filly in Trotingham, with her sister Xethon Skull. As a filly, she hated school and didn't get good grades. And when her parents wanted to send Xethon to Flight Camp in Cloudsdale, Diamond felt exited at the thought of her sister going away for a month. Sadly, her parents could not afford to send Xethon, which then lead to Diamond persuing her gaming more than often and she became very anti-social. Eventually, she reached the high score of many games all at one go. Her excitement was let loose and she gained her cutie mark. This then drove her sister, Xethon, to try and find her special talent.

After the Princess Twilight Sparkle's coronation, Diamond and her sister decided that they wanted to go to Ponyville in hopes to leave their awkward lives in Trottingham behind them.

Diamond's mother and father divorced when she was at a young age, this was the main cause of her annoyance towards her sister and other ponies. Now as well as a real mother and a real father she has a step-father, two step brothers and a step sister. Diamond is older than all three of her step siblings, but ultimately Xethon Skull is the one who is often left in charge.

Xethon is Diamond's sister. Their relationship can change from a love one to a hate one rather fast depending on the sisters' mood.

Diamond enjoys being around Sparkle as Sparkle reminds her of how she used to be. 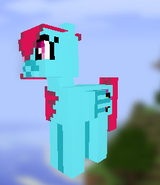 Aww, they love each other really. 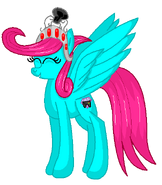 For her birthday, Xethon Skull let's her were the leader's elemental crown.
Add a photo to this gallery
Retrieved from "https://bronies.fandom.com/wiki/Diamond_Gamer?oldid=177512"
Community content is available under CC-BY-SA unless otherwise noted.