Dream Cast was born a Unicorn who always wished he could fly like the Pegasi he was madly jealous of. One day out of frustration he set off from Ponyville, his hometown, into the Everfree Forest. Looking to see how far he could go before turning back he stumbled upon a stoney castle across a rope bridged chasm. Hearing the voice of Luna/Nightmare Moon he was given the choice of getting his wish of getting Pegasus wings, but at the cost of his magic and horn. After thinking about it for what seemed an eternity he finally decided that an opportunity like this would never happen to him again and took up the voice on her offer. Since the world needed balance and no Unicorn could have both the power of magic and flight he was forced to give up his horn and magic. Having rushed at one of the stone walls that made up the castle he snapped off his horn, and sure enough upon completing the task his wings sprang from his body. Flying back to ponyville to show off his new wings he was almost immediately shunned for having given up such a major part of his life. This left Dream Cast bitter when it comes towards dealing with other ponies. He now lives in the Everfree Forest on a permanant basis. Where he enjoys the freedom his wings give him everyday.

Before he got his wings you would have found Dream Cast wasting time with whoever wanted to play around town. A prankster at heart Dream Cast is not mean by any stretch of the definition. When alone he would sit and wonder how great it must be to fly around likes Pegasus. After he got his wings he was so overjoyed that he rushed home to share his new gifts. The ponies he once thought were his friends wanted nothing to do with him any longer, more out of societal taboos than anything dealing with Dream Cast himself. This left Dream Cast to live alone in Everfree Forest. The few times he does have to deal with other ponies he says little and would rather be alone just as quickly. When he alone though he loves to fly as far as his wings will take him. With no real place to call home or any pony to anchor him to any one place,, he flies wherever his heart feels like going to. But he does miss his old friends, but his pride would never allow any pony to ever know it.

Rainbow Dash - She was Dreamcast's inspiration to get wings it the first place, along with the Wonderbolts. Is married to Midnight Flare.

Midnight Flare - A new friend, helped him move back to Ponyville after self-exile to the Everyfree Forest. Considers Dream Cast a little brother.

Fluttershy - Is in a relationship with her. 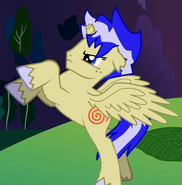 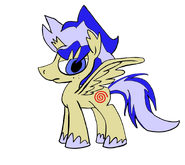 Dream Cast as drawn by my friend Joey Waggoner 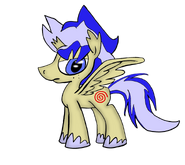 Dream Cast as drawn by my friend Joey Waggoner, but I added the shading on top 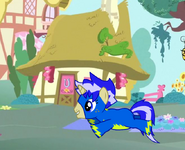 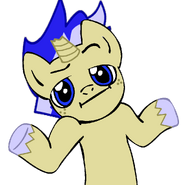 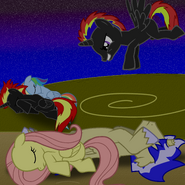 Life was great...once
Add a photo to this gallery
Retrieved from "https://bronies.fandom.com/wiki/Dream_Cast?oldid=144882"
Community content is available under CC-BY-SA unless otherwise noted.