Espresso is a brown pegasus with a dark red mane/tail. He wears a grey hat, and a grey and red striped scarf. His eyes are green. His cutiemark is a coffee bean with a wisp of "coffee aroma" behind it. He has little freckles across his nose.

Espresso's cutiemark is a coffee bean with "coffee aroma" behind it. Although its origins are currently unknown, it obviously has to do with coffee.

This pony works for a small coffee shop in Ponyville called "Hoof and Grind". He makes, serves, and drinks coffee there. He creates his own special coffee blends and drinks.

Not much is known about the stallion. He lives in the clouds above Ponyville by himself.

Espresso is a kind stallion. He's playful and teases often. He's a hard worker, and he takes pride in his coffee creations. He loves to soar through the sky, and his favorite thing is to watch the sun go down from his home in the sky. He's an easygoing loaf, and a little clumsy sometimes, but he's very clever when it comes to other ponies emotions.

He has appeared in one fanfic called "Bright" as Ribbon Chaser's best friend. 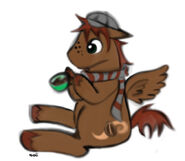 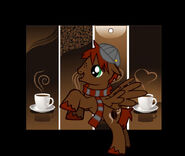 Add a photo to this gallery
Retrieved from "https://bronies.fandom.com/wiki/Espresso?oldid=22804"
Community content is available under CC-BY-SA unless otherwise noted.