Fitz is a male unicorn. He is a light grayish blue with a naturally two-toned mane. His eyes are a bright maroon. As a pony, he is a little smaller than average, almost having the smaller body structure of a mare. This is more evident in the human world.

He works as an employee at Cloudsdale's field office in Marecadia. In this job, he mostly does paperwork pertaining to weather scheduling for hired events. He is a student to another unicorn weather pony who is helping him to develop his weather spells. His name comes from the name Fitz, which means "son of". This is representative of how he follows in his mother's footsteps and becomes a weather pony. In his appearance, the hat is worn simply because he likes it and to hold his weather permit card under.

Fitz is very sassy and smart. He is not very shy about being wrong. Fitz is confident in his abilities in weather magic. He hates to wake up early but loves to stay up late.

However, this can come at a price. He can be blunt and insensitive and has a bit of a short temper.

He also has a habit of ending sentences with "-ish". This is a habit the creator has.

Fitz is skilled at weather magic. He specializes in the following spells:

A spell that causes rain clouds to rain.

It clears all types of clouds, raining or not.

A spell that allows Fitz to walk on clouds. This is required at his job as a safety precaution.

Like most unicorns, Fitz knows basic illumination and levitation spells.

Earl Grey is Fitz's boyfriend. Earl usually acts as someone to ground Fitz in reality when he becomes overly wild or snarky. They are nearly polar opposites.

Malarkey is one of Fitz's best friends and loves to have fun with him.

Bright Lights is Fitz's mother. He has a good relationship with her and especially in his younger years, they were very close.

Fitz is the colt of an Earth Pony and a Unicorn. He was raised by his mother, the unicorn. She enrolled him in classes to teach him weather spells from an early age because she was a unicorn weather pony and wanted him to follow in her hoof-steps. To her dismay, he challenged the teachers in their teaching methods and cut classes, lowering his grades dramatically. The last day of the school year, to graduate with even low passing marks, he had to take a test.

Instantly, Fitz was scared, but he knew that he had to try his best. He went to the judges and saw a white cloud in the center of the room. The judges told him that he had to change the cloud into a raincloud. He used all the power he could and the cloud was surrounded in a band of maroon magic. When the band faded, the cloud dropped only two drops of rain. He was awarded points on the test for changing the cloud, but barely any for making it rain. Because of this, Fitz graduated with passing marks, however low. He then decided to strive to train and become better at weather spells. He did gain his license for weather spells for graduating, which is required in Marecadia.

Later, Fitz applied for a job at the Marecadia Field Office for the Cloudsdale weather factory. He did not think that he was going to get a job, as it is a very competitive office, but to his surprise, he was requested to be an understudy for a very powerful weather unicorn. When he realized that doing rain weather spells was his destiny, he gained his cutie mark. Eventually, over the years he became the head rain unicorn. Now he works alongside the four other head unicorn weather ponies: lightning, snow, fog, and wind.

A minimalist wallpaper of Fitz. 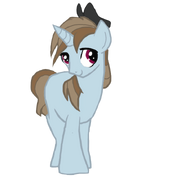 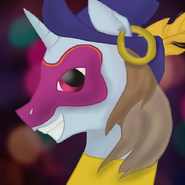 Fitz in his anthro form for Equestria Girls.

"First day of school in this world. I can do it!"

An alternate outfit for EG Fitz.

Add a photo to this gallery

Retrieved from "https://bronies.fandom.com/wiki/Fitz?oldid=178535"
Community content is available under CC-BY-SA unless otherwise noted.