The higher you climb the harder you fall

One day in the castle, Celestia saw a flame coming straight toward her. In it she found a baby unicorn. She adopted him and he became an alicorn at age 3. He became an alicorn because he brought together two separate tribes of yaks. Sure, he may be a whole lot differint now, maybe now he would have been just a unicorn, or earth pony...

His talent is to keep the fire of friendship burning. This means he can reconcile with magic. He might sometimes need to solve friendship problems himself. Also, being Princess Celestia's Son, he is very advanced in magic. But nowhere near as much as Twilight Sparkle.

Flare's weaknesses include: ·He is scared of a certain substance clashing together. ·He is hard to get away from stuff he is used to.

His strenghs include: ·He created his own type of fighting ·He is very close to his friends 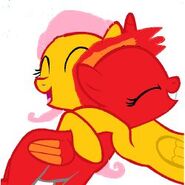 Flare and Fluttershy have deep feelings for each other
Add a photo to this gallery
Retrieved from "https://bronies.fandom.com/wiki/Flare?oldid=177378"
Community content is available under CC-BY-SA unless otherwise noted.