Fudge is a peach Pegasus. She has short orange hair. Her eyes are a deep red, and between her eyes are white freckles. She also has white spots on her flank. Her cutiemark is a orange Popsicle with a cream stick. She has a lazy , hearty personality. Also has a mean sense of humor.

Fudge's job is working at a ice cream factory. Strangely being the pony with the lowest pay. She had past jobs, but got fired or quit.

Fudge does not have many friends . She is in a relationship with Creeperman . She is close friends with Blue shuffle,apparently knowing him since she was little. She is close with her little sister,Horizon . 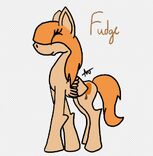 Fanart of fudge by badmoonmoon on deviantart

Fudge flying ( with her old hair )

THIS IS DA BOMB! 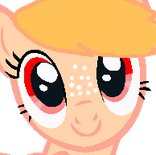 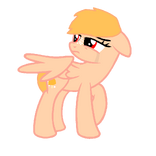 Dont worry , this is just a silly photo , she isnt a alicorn now

Fudge and her little sister

Fudge has stolen Creeperman's heart. <3
Add a photo to this gallery
==
Retrieved from "https://bronies.fandom.com/wiki/Fudge?oldid=174136"
Community content is available under CC-BY-SA unless otherwise noted.