"Once you get on a Goblin Pony's bad side, you'll regret it for the rest of your life."

Some goblin ponies come in different shapes and sizes. They sometimes have very unique feature; such as two horns instead of one, rows of teeth, and having arm-like appendages with a special organic fabric-like translucent to help them glide. Their durability and stamina are tougher than a regular pony's.

The goblin ponies are governed by the fearsome King Shed.

Few goblins are also able to do Magic, and cast their own special kind of spells. Goblin Ponies are expert craftsmen and builders, living in a lower middle class style. Constructing their own weapons and tools, some infused with magic.

The goblin ponies have a different type of job in their realm:

The Miners- In change of digging through the tunnels and crafting the gems they find.

The Builders - Experts in metalwork and architecture. Creating machines and design buildings.

The Warriors - Trained in advance combat and magic spells.

They are not known for being the friendliest of creatures, but they are known for being the cleverest. Goblins have been lurking in the darkest regions of Equestria. They didn't want anything to do with the ponies. So they remain in their realm for a long time.

Until, one goblin pony named Malice, who holds no alliance to anyone but himself, not even to his own kind, was despised by the other goblins because of his twisted obsession for pain and destruction. He was a ruthless beast who has gone mad with power, hunting and destroying everything he points at to satisfy himself. He plans to escape from the shadows, and terrorize Equestria for kicks.

It is said that when born, a Goblin Pony infused with the mud they were born on. When they dies, their bodies are converted to mud. 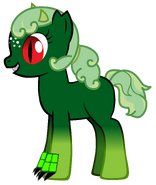 Finn MacCool as a Goblin Pony by Aniju Aura. 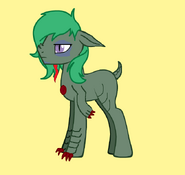 Finn MacCool.
Add a photo to this gallery
Retrieved from "https://bronies.fandom.com/wiki/Goblin_Ponies?oldid=81544"
Community content is available under CC-BY-SA unless otherwise noted.