Grace definately falls under the, "Look but don't touch." Trope; Being a stage actress, singer, and occasonal model for "Playcolt". Treating her looks and body a took for work than anything else. A job she takes extremely seriously. Enjoying attention when she's on stage, but not a whole lot after.

Quick to anger and extremely slow to calm; she's loud, passionate, overdramatic and speaks her mind whenever she can. She's often a pony who allows actions to take presidence over words; simply doing what needs to be done instead of talking about it, even if it isn't the brighest course of action to take.

She obsessed with trying to be a good mother to her son, Silver Screen, but depises actually being called out on it, often relating the image with age and weariness (Her greatest fear); the exact opposite of her, but despite her age she has a tendency to be grossly, GROSSLY, immature.

Grace has a slight drinking problem.

Despite all this, Grace is a good mare deep down... just a tad selfish occasionally.

Grace is an Akhal-Teke. They carry a gene that allows for thier coats to shine and shimmer gloriously in the pressence of lighing. Grace loves the attention it brings her and adores every moment of it. She sees herself as the sparkleing diamond of equestria's stage life and the best way to self advertise. Always making sure the spotlight is on her so she can hypnotise the audience with her raidiently (and appropriately) Golden fur. However, as she has gotten older, a small streak of silver can be seen in her mane, showing her true age despite her youthful appearence.

A few strands of gray in her mane have turned to a cooling silver string. Still, she fumbles her hooves through them whenever nervous or questioning her beauty.

Onstage, she very little jewls or makeup and off she wears little to nothing except for a necklace or earrings. She perfers her natural beauty and sees the other vanities as a sign of "weakness"

In grade school, Golden Grace tried out for her drama club, falling in love with the idea of everyone having to pay attention to her. Getting the lead role, she practiced day and night for the role. At the end of the show, her cutie mark appeared. A few stacks of money, her teacher explained it meant fame and Grace was destined for it.

Thus, not setting up the mare for the many hardships and challenges that followed dropping out of highschool to try and make it big. Eventually she did, but it took way too long.

While an earth pony normally has no magical abilities, Grace is no exception. While she has no magical powers, her son does. When Silver enchanted her voice she absorbed a large portion of the young pony's magical potental, allowing her to manipulate her voice into nearly any pitch possible or even changing it completely. Whenever she does choose to change her voice, there's a eerie green glow that eminates from her throat. When asked, Grace simply says it is a gift from her son; which she attempts at every turn to repay him for. 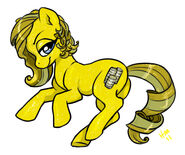 Playcolt : Magazine Cover
Add a photo to this gallery

Retrieved from "https://bronies.fandom.com/wiki/Gracie_Gold?oldid=106834"
Community content is available under CC-BY-SA unless otherwise noted.