Start a Wiki
Heart Blaze is a brave and daring female Changeling from the Chrysalis Hive. Heart lives in Ponyville. She is the arch nemesis of Silent Dust and best friend of Xethon Skull. Heart is part of the Elements of Love and weilds the Element of TBA.

Heart Blaze is kind hearted but also very brave and daring. She isn't afraid to hold strong and unpopular opinions, and doesn't care about what ponies think of her for these opinions. However, she does mind if a pony has a negative opinion on the way she looks.

Heart Blaze's coat is nearly black in colour, her hair is a strong green colour. Her mane is styled somewhat simmilarly to that of Trixie Lulamoon's, but has holes in it- like a Changeling does. Her tail is rather messy and is styled somewhat similarly to that of Rainbow Dash's, but again has some holes in it to give her a distinct changeling look. Her legs also have 4 holes in each of her four hooves. Heart accessorises with a green necklace which has a red heart shaped gem fitted inside a gold plate one it, and a green body harness that can be connected to each other. Unlike other changelings, Heart Blaze has a cutie mark.

During the "Canterlot Wedding" episode, Heart Blaze is one of the changelings that is there at the time of invasion. Heart Blaze has always been against what changelings do to species other than their own. So, when she found out that their was a group of ponies (Mane 6) trying to stop Chrysalis, she gave Twilight a spell that would undo a changeling spell to free trapped ponies. Meaning that Cadence could get to Shining Armour to perform the spell to remove all the changelings.
While Heart Blaze was removed from Canterlot like all the other changelings, she earned a cutie mark. The 1st and only changeling to ever get one. Heart Blaze's cutiemark represented her name, it pictured a blazing heart.
The changelings were sharp at Heart Blaze after earning a cutiemark, they all knew that she was the one who really lead to their downfall. So, upon arrival at the changling country, Heart Blaze was called in to Chrysalis' quarters.
After much conversation and arguments between the two, Chrysalis came to the decision to exile Heart Blaze. When exiled, Heart Blaze made her way to Equestria in hope to start again.

Xethon is Heart Blaze's very best friend. Around the time Heart Blaze moved to Ponyville, Xethon and her sister Diamond Gamer, also moved the Ponyville. Xethon saw that all the other ponies in the town were mistreating Heart Blaze, and decided to befriend the lonely changeling.

Twilight Sparkle and the Mane 6

Heart Blaze has a healthy friendship with the mane 6 ponies. Seeing as she did aid them in getting rid of Chrysalis.

"As long as that's what you want, don't come to me when you're getting married to the wrong pony"
- Heart Blaze

Heart Blaze is convicted for her Betrayal of the changling race. 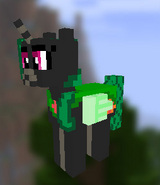 Final version of Heart Blaze as an Equestria Girl.

Retrieved from "https://bronies.fandom.com/wiki/Heart_Blaze?oldid=183407"
Community content is available under CC-BY-SA unless otherwise noted.