Start a Wiki
Hullabaloo or Prince Sunglare Twister is the son of Princess Celestia and Discord and the brother of Princess Havoc Sunlight. He is the love interest of Apple Bud.

Hullabaloo is the son of Celestia and Discord. He was originally thought of as a sin because of his father being The Spirit of Chaos. Until Celestia and Discord married, he was hidden from public eye with Princess Luna watching over him. On the day of the wedding, Hullabaloo rose from his former life and began his journey as the newest Prince of Equestria.

As a foal, Rainbow Dash would look after him and his sister for Celestia as she was trusted with the secret. As a result, Havoc and Hullabaloo have been best friends with Apple Bud for awhile.

Since Alicorn magic is very powerful, Hullabaloo had to learn to control it, until they discovered a curse. Over a thousand years ago when Discord was wreaking havoc around Equestria, he bumped into the olden horseshoe pony. She saw the havoc he was causing and decided to teach him a lesson for later. She cursed him saying that his first born would only be able to use chaotic magic. At the time, Discord thought of this as nothing, but after being reformed many years later he realized the meaning of the curse. Discord avoided to fall in love, except with Celestia. Celestia was in love with him and Discord was in love with her. As he and Celestia soon had a child, he finally told her the curse. She was at first mad, but understood why he hesitated to tell her. The curse was that the first born of Discord would only be able to use chaotic magic, thus only his father could teach him and his knowledge to Chaotic Magic was very limited.

Hullabaloo is not very serious like his mother. He loves to play pranks and tell joke to citizens, lightning up their day. Because of his upbeat hyperness, Hullabaloo is in charge of keeping ponies happy and safe.

Hullabaloo can only use Chaotic Magic due to a curse, thus he isn't very skilled at it. For flying, he is at the level of a normal pegasus.

On some occasisions, Hullabaloo's chaotic magic can be too strong for him, resulting in a possesion. In this form, his eyes change color with streams of purple. His personality changes dramtically, becoming cruel and dishonest.

Hullabaloo is shown to be happy and hyper, even being very oblivious at times. On that hand, Hullabaloo can be very emotional sometimes, resulting in Havoc usually defending him.

Hullabaloo and Discord have a very good relationship. Discord is his mentor in chaotic magic, but must remind him to only use her powers for good, or his mother has a very hard punishment.

Hullabaloo and Princess Celestia are very distant. He constantly pushes his mother away thinking she won't understand what it's like to feel like someone so close to him could feel so distant. Unknown to her son, Celestia has felt that way with Princess Luna.

Havoc's is Hullabaloo sister, they are fairly close and Havoc is always ready to step in to defend her brother.

Apple Bud and Hullabaloo both have a mutual attraction to each other. Hullabaloo's sister, Havoc, loves to put them in awkward situations. When not trying to get each other's attention, Apple and Hullabaloo love to hangout.

Apple Bud is Hullabaloo's closest friend other than Havoc.

Hullabaloo has a deep respect for Xethon as she isn't afraid to be her self.

Hullabaloo sees Dan as a "Cool Kid", constantly trying to get dating tips from him.

Hullabaloo is shown to be fond of Soaring Lightening as she would help baby sit him as a child. Soaring has also helped Hullabaloo with his confidence.

Big Macintosh was shown to loath when Hullabaloo would hang around his daughter. This because Big Mac didn't like how Discord was, thus he didn't trust Hullabaloo and his silliness (though he did trust Havoc). Hullabaloo one day saved Big Mac when the barn was burning, even rebuilding it afterwards. From then on, Big Mac trusted and respected Hullabaloo.

Rainbow Dash is fond of Hullabaloo knowing he is perfect for her daughter. Rainbow loves Hullaballoo's attiude around the farm, even though Mac doesn't like him. 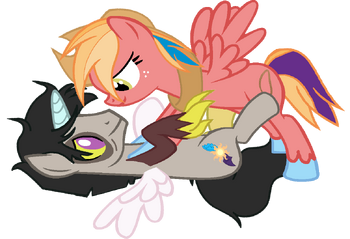 Retrieved from "https://bronies.fandom.com/wiki/Hullabaloo?oldid=177515"
Community content is available under CC-BY-SA unless otherwise noted.