Lavender is an Earth pony from Balitmare who suffered a lot during her past.Lavender was made by SnowyPonies.

Lavender has a lavender color coat and a dark blue mane and tail.She has brown eyes and and an eye patch over one eye.Lavender also has a bandage wrapped over one of her legs.Some ponies find her to be terrifying. 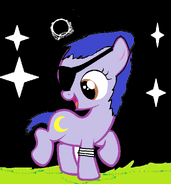 Lavender as a filly getting her cutie mark.(Take note that her bandage is on the wrong leg)

Lavender in her Gala outfit 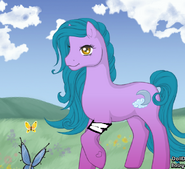 A G1 Lavender
Add a photo to this gallery
Retrieved from "https://bronies.fandom.com/wiki/Lavender?oldid=22299"
Community content is available under CC-BY-SA unless otherwise noted.