Start a Wiki
"A true warrior can fight his fears alone."

Lightning Star (also known as "Star of Lightning") is a pegasus pony who resides in Ponyville, formerly Manehattan. She lives in with her cousin which is Musa.

She is full of curiosity. She always trots on things she never saw in her life. But sometimes, she ends in danger. She doesn't like pets, because she is allergic to them. She is also a hardworking pony with responsibilities like Musa.

She only cares about her family and her wings. So that's why you can see her every morning, working out with her wings. She hides a huge dumbbell in her house, which she uses for working out and her exercise.

She also likes to yoga, dance. She loves physical activities, and she never "gives up" on them, but one day when she got sick and forgot to attend the yoga class which she registered, she still attended, resulting a horrible sickness that she may not go outside her house in 5 days.

She also tend to sing, so everyday she sings in her bathroom.

But everyday she was sad and lonely deep inside, she was traumatized by her father. But, by the help of her friends, she became stronger and stronger, but happier. And she was able to face her fears.

Her birth was actually "complicated" as stated by the doctor. The mother was hard trying to give birth Lightning, resulting that she died. After the father witnessing her death, Lightning Star was "bullied" or "abused" by her father after. Resulting that her father is put into jail and died also by his punishment. With that, her aunt was take cared her before she reside in Ponyville.

After being abused by her father, her life was a tragedy. Her father didn't even educated her about wrong things, or just "things". But, she grew happier everyday and even stronger, by the help of her friends. Marigold stated that she is a "Warrior" because she was able to face her fears, deep inside.

Aoife, knowing her, she be-friended her and respects her as well. Lightning was so ever happy in her life with her friends by her side.

Lightning Star has a yellow "shade" on her hooves, which she makes so different to other ponies. When she was a filly, many bullies "bully" her because of that.

She has a cyan eyes, white coat. Her cutiemark is a red star with blue star, violet star and a pink star.

In her rainbow power, her wings has a shade of arctic blue. Her hooves are still as usual. Her mane and her tail are different. Her mane consists gold and light purple, while the tail consists red and dark red.

She has 3 arctic blue stars on her face.

On her hooves, they are pink uncolored stars. On her wings, there are purple stars, which is also uncolored.

She was dressed in a black dress.She has a pin of purple and pink star.

She has a dark red belt, she has a red blue purple and pink star on the belt.

Another one is, her hair was different from her pony version.

"You don't know everything about me.."

"Aoife? Was that really you?!"

— Lightning Star excited, that she is finally meets Aoife.

"After my mother's death, my father abused me or in short, he "bullied" me. That's why auntie, my mother's sister, take care of me instead after she put my father into jail.."

— Lightning Star telling her story to her friends.

"Wait, the last time I saw you since we were fillies that you were an earth pony. But now your a pegasi, yay! Were the same "kind or species" now!"

"A true warrior can fight his fears alone." 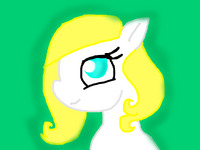 Retrieved from "https://bronies.fandom.com/wiki/Lightning_Star?oldid=115116"
Community content is available under CC-BY-SA unless otherwise noted.