Lime Shot is a pale olive green pegasus. Her mane and tail are lime green with rose pink streaks. Her eyes are rose pink. Her cutiemark is a lime with a pink star behind it.

Lime Shot's cutiemark is a lime with a pink star behind it. She is a mixed drink pony, her signature drink being the "Lime Shot" She found her cutiemark while playing around in her kitchen when she was young, making limeade and mixing it with cherry juice.

This pony has nope job yet. She is new to Ponyville. It's assumed though, that she is going to work at the coffee shop "Hoof and Grind" in the future, though.

She was a bartender in Fillydelphia. Lime Shot didn't get along with her father. One day, when he became cross, he ordered her to leave. Her mother wasn't happy about it, and cried. Lime was thick headed and stubborn, so she left as fast as she could. She was only supposed to go to the next town over, as to be close to her mother, but ended up going much farther than expected and ended up in Ponyville.

She's a very happy and energetic pegasus. She's very stubborn, and she's got a bit of an attitude. She's very kindhearted and modest, though. She's easily scared sometimes. Her entire composure changes when she's doing something she's good at- a confident show of her skills at serving drinks for example. She absolutely loves butterflies.

She has appeared in one fanfic called "Bright" where she is new in town. She makes friends with another pony named Ribbon Chaser, and she works with her and Rarity to make clothes for a job interview. 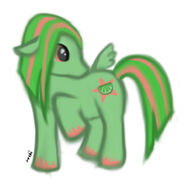 Add a photo to this gallery
Retrieved from "https://bronies.fandom.com/wiki/Lime_Shot?oldid=185786"
Community content is available under CC-BY-SA unless otherwise noted.