Start a Wiki
Lone Star is a country/rock singer and one of Ruby and Lightning's old "tour buddies" while they were on the streets.

He's roughly the same size as Applejack and the rest of the mane 6.

With a harvest gold coat, a thick, full brown/light brunette mane and charming hazel eyes its fair to say that he catches the eyes of most mares he comes across.

He speaks with a typical southern cowboy accent, similar to AppleJack's however deeper and more masculine.

He dosent like the big noises or bright lights of the big citys instead prefering the quiet of the country and the nature around it. However this quietness did often lead to boredom, this makes him resort to other means of entertainment, sometimes he likes to cause trouble by pulling pranks on other ponies, normally getting away with it by evading capture and using stealth. When twilight asked how he escapes getting caught he states "through years o' practice and learning from your mistakes which often involves gettin' caught...... A lot".

His early years consisted of getting into "harmless fun" with the locals, learning to buck oranges and making every mare in his class at school faint in his presence.

One day he, his brothers Shooting Star, Super Star and sister Shining Star decided to discover their dream of being country western singers out in the big city's of equestria however their plan hit a snag when they realised that the citys weren't as forgiving as their dreams made out.

During this time on the streets they bumped into a certain Ruby and Lightning Rocks, who they immideatly made friends with because of their passion for music.

During this time Lone and his siblings were hay bent on doing country music, however country western want really popular outside of the clubs and bars it was performed at. Lightning bought them a few CDs in exchange for a couple of nights down on their farm.

Although the CD material was decades old Lone and his siblings loved the style of hard rock, punk and blues boogie that they contained. The CDs were by Rose tattoo, AC/DC, Aerosmith, ZZ top and lynyrd Skynyrd. They'd never heard anything quite like it, Lightning had chosen wisely because the artists were all quite popular for their 'hard rock country swagger' style. Lightning and Ruby stayed for about a month on the Stars family farm, making great friends with them however their calling came and moved on for canterlot saying they'd be back someday if they got famous. 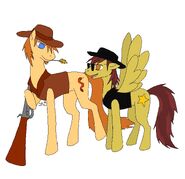 Lone and Gungho, conversing about things. 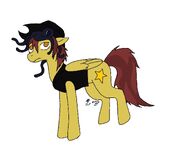 Lone Star having fun with his sister Shining Star

Equestria Girl Lone Star
Add a photo to this gallery

Retrieved from "https://bronies.fandom.com/wiki/Lone_Star?oldid=88940"
Community content is available under CC-BY-SA unless otherwise noted.