"Truth and Rightousness come from the hearts of all"

Princess Mairwen is the best friend of Princess Lorikeet , and a fellow Alicorn in her town of Windtonvale . After Lorikeet's guardian, Sabregust , moved to Ponyville after an attack on Windtonvale, Mairwen must work together with Lorikeet to both prepare the frontier lands for another attack, and for them to gain their cutiemark.

Princess Mairwen was born Mairwen in Vanhoover, to a Unicorn mother and a Pegasus father. They were suprised to see that Mairwen was born an Alicorn, which was uncommon for Unicorn and Pegasus couples. Because of the fear of having an Alicorn as a daughter, they gave her to Princess Cadence to take care of her till she was a filly, just able to walk. Cadence then gave her to another town, for them to take care of and make her a leader. She heard of the Frontier Lands and their region capital, Windtonvale , and head off to the town. In a secret meeting with the Mayor and Garrison Leader of Windtonvale, Mairwen was put into the town under the care of a Pegasus and Unicorn family, which was later found to be the original parents of Mairwen. The parents were no longer afraid of caring to the young Princess after hearing of another Alicorn in Windtonvale, the Princess Lorikeet , who was being cared for by two friends in the town. Mairwen spent her time in Windtonvale after this.

'Leave her ALONE!' - Lorikeet sticking up for Mairwen

When Mairwen joined school, she was a laughing stock. She was bullied and teased because she was an Alicorn and she was very quiet, and refused to talk to those who bullied her, thinking that they were too ignorant to even care for her voice. She was scared to talk to anyone except her parents and Princess Cadence, who visited her occasionally with Shining Armour. However, in their lunch time on the first day, when the abuse started, another pony, who was also teased and tormented, stood in front of her, protecting her from the bullies. She was an Alicorn too, and Mairwen knew this was the fabled Princess Lorikeet. The crowd of bullies told her to leave like a baby princess she is and her royal baby friend too. Lorikeet stared angrily into their eyes, saying nothing. They called again, saying that the little baby princess was going to cry. Lorikeet was about to cry, then her eyes changed to a steel expression and she shouted at the hoard 'Leave her ALONE!'. Mairwen felt very happy to see that at least one pony would stand up for her. The bullies moved on to an easier target, and left the two Alicorns, shouting insults, calling Lorikeet a royal blank flank and Mairwen a mute mule. Mairwen didn't care of this insults and hugged her new-found friend for her bravery. Mairwen whispered to Lorikeet, 'This isn't fair, no pony should be treated like that.' Lorikeet frowned and replied 'Yeah, it's very sad that someponies act like that.' Mairwen, feeling Lorikeet's courage flow though her, said to Lorikeet 'When I become a full princess, with my cutiemark, I'll never allow that to happen to anypony.' Lorikeet smiled and from then on, they were the best of friends.

Mairwen, even though very quiet, is a fantastic and inspirational speaker. She is able to think of the most touching and beautiful words to say, that it seems that everything she says was thought hard for in a speech. She also has the ability to create long speeches from the top of her head, and speak with such power, that it's said that she will become the voice of Equestria.

Mairwen is also very smart, knowing more than Lorikeet and most people in her class. She mainly knows unique and interesting bits of information, which allows her to know many things about many topics from the top of her head. Lorikeet tests her on this by playing trivia games with her, which she excels at.

Mairwen is very quiet to strangers. She refuses to speak to strangers even if she is more than capable of doing so, this is thought so because some of the fear of caring for an Alicorn may have affected Mairwen. However, she would never, never talk to someone who has hurt or teased her unless they have apologied at least once, as Mairwen finds it completely unfair to be a bully. Although most of the bullies at her school have apologied at least one, and she would speak to them freely, 3 of them haven't and Mairwen would never speak to them, even when being confronted. She would either fly off, or ignore them. However, even with ponies she knows quite well, she would speak in a soft, quiet tone.

Care for her friend

Mairwen represents the element of Rightousness, because of her belief that all ponies deserve equal treatment. She uses this power to help other ponies. Her particular ability is to rally other ponies to follow and believe in a rightous cause. Her element is in the shape of a scroll.

Sabregust and Glimmer Beam : Mairwen first thought that Sabregust was 'just a stallion', and Glimmer was 'just a unicorn' but for Lorikeet, they were heroes and her siblings. She didn't realise that Lorikeet's only true figures of love when she was born was Glimmer and Sabre, who cared for her since ever. Mairwen was skeptical, but after hearing about it from Lorikeet, she decided to meet them, of course, without speaking. She found Sabre to be very loyal and Glimmer to be very caring but other than that, just ponies. But suddenly, a storm rose from Lake Torrent and the wind caught under Mairwen's winds, flinging her into the air. Sabregust flew up into those winds, imposssible for Pegasi to fly in, and rescued her. The winds froze her winds, but Glimmer rubbed a defrosting potion on them, and they healed immedietely. Mairwen finally believed Lorikeet after this, and saw the couple as 'both normal ponies, and heroes'.

Mairwen doesn't speak much, but she likes to talk to Sabregust about her issues, but all she really wants to say to him is that he is a hero in both her and Lorikeet's eyes, and how they can be heroes too.

Rest of the Frontier Friends (Ratchet , Scope and Cherry Scribble) : Mairwen likes and is friends with all three of them, but she doesn't have any significant relationship with them, and therefore, doesn't speak much to them.

CMCs: Mairwen is good friends with all the CMC, particularly Babs Seed, because she is very assertive of Mairwen, and Sweetie Belle, because they both like to learn and read new, interesting facts.

Rumble : Rumble is Mairwen's crush since she first came to Ponyville to visit Sabregust. She really wants to tell him about her feelings to him, or anypony about it but she is really fearful of talking about it. She has told no pony about her crush on Rumble except Lorikeet, who swore to secrecy about the topic. Even though Rumble didn't even have a clue that Mairwen has a crush on him, she still has a 'crush' on him. In the future, Mairwen and Rumble would be a couple, or Mairwen's future husband.

Blessed Tempest: (future daugther) Mairwen deeply cares for Bess. She always checks if she is sick, and always checks if there are bruises. Mairwen doesn't want Bess to experience Mairwen's past. She teaches her everything. 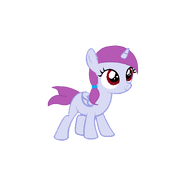 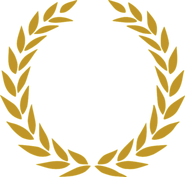 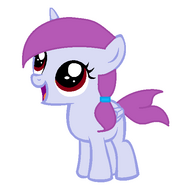 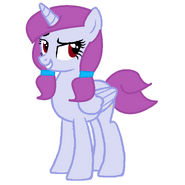 The two best of friends and the Royals of the Frontier, Mairwen and Lorikeet

Mairwen telling about her life with Blessed Tempest. Image by User:Astralfleur

The Family. Image by User:Astralfleur

The Frontier Friends! Image by User:Lunaflaire 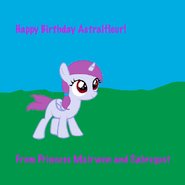 Mairwen's gift to her original creator, User:Astralfleur
Add a photo to this gallery