Nova is a kind and selfless pony with a heart of gold. She cares deeply for her friends and family. She is shown to know many things about plants and herbs and seems to be able to talk to them and understand what they say. She has never shown fear of anything possibly from the fact that she is still under a curse and she has nothing more to fear than herself. She has a deep scar over her heart from having lost her mother. She is mature beyond her years.

Life in the land of Crystal

When Nova, an Alicorn Crystal pony, was young when King Sombra began to take his place as king of the Crystal Empire. Nova's family, a family of aristocrats and the only sorcerers of the empire, took a stand along side Celestial and Luna. Though they succeeded in sealing King Sombra away, Nova's mother died during the battle.

Nova's father took her away from the empire and asked a group of crystal ponies to take her to Wisteria where she would be safe. She was soon adopted by Krystal, the ruler of Wisteria and a personal friend of the Crystal Empire's royal family. Nova's father left her so she would be safe and returned to the empire, hoping he would see her again one day.

Cutie Mark Crusaders: Nova is a sort of role model for the young fillies, since she had a blank flank when she arrived in Ponyville. She also became the unofficial leader of the Crusaders, helping the fillies to find their Cuite Marks and keeping them out of trouble at the same time.

Icarus: Icarus is a creamy-brown and coco brown dragon with feathered wings, a griffon-like appearance, and vivid blue eyes. He was hatched sometime before Nova arrived in Ponyville and is usually seen sitting across her shoulders or sitting on her back. Icarus is much more mature than Spike, though he is younger than the dragon, and tends to point out simple things to his fellow dragon. He can breathe fire and fly. He is Nova's friend and is the only one from Wisteria who does not know of Nova's curse

Eric Longbow: Nova accidentally ran into Eric while he was tracking a group of cattle that had run away from a ranch not far from Ponyville. Nova loathed the hunter at first, mainly because of how he treated the nature around himself. She slowly grew a soft spot for him and became close friends with the pony. They have hinted towards a romantic relationship once in a while.

Heavy Matter: Though Nova knows very little of Heavy Matter, she does not hate Heavy Matter. Instead, their relationship is a mutual one. Nova has met Heavy Matter on more occasions.

Wind step- instead of flying like most Alicorns, her wings were injured and she had to learn a spell to allow her to glide and gallop through the air on the winds

Plant Whispering- Nova's talent is the ability to hear plants and even understand them when they "speak". She tends to translate what the plants and trees are saying to others when needed. She is also able to manipulate their growth and movements.

Leaf Manipulation: Nova's body glows and glowing-yellow rings form around her. The rings go faster around her body, and create a burst of light. Light green leaves are then shot at the target from the burst of light, leaving yellow streaks behind them. She uses this for attacks from a distance. Very few know this spell.

Magic- Nova's magic is based off the elements of nature around her, such as giving withered flowers life and blooming into brightly colored blooms, even using vines and grass to grab things and move them from place to place. Her magic color is a bright crystal blue color mixed with sparks of inky black.

Future Sight- at times, as apart of her enchantress training, she learned how to see bits and fragments of the future both good and bad. Though she only uses it in times of great parole, she also sees visions in her dreams by accident that tell of a disasters that is soon to come

Sacred Sword: a spell known to very few and only performed by Alicorns. It is capable of cutting through anything, even magic. Because of her heritage, Nova is capable of this spell and uses it in dire situations.

Like other Alicorns (ie. Twilight Sparkle and Cadance) Nova was not born an Alicorn, though her father is one. Nova was actually born a unicorn, just like her mother. When she saw her mother die, her magic became nearly uncontrolable and forced her to become an alicorn in order to hold it in. 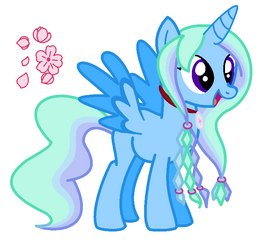 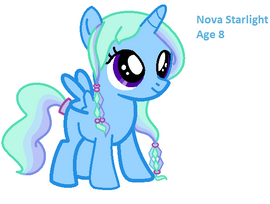 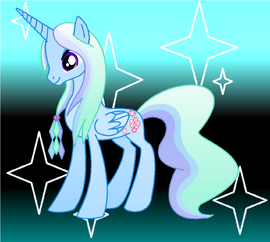 My best attempt at a crystal pony!! 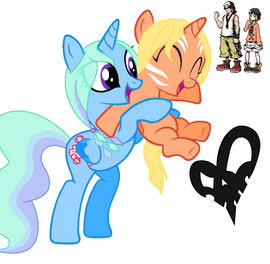 Nova and her sister, Rhyme 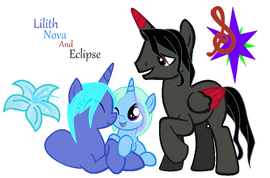 I really wanted to draw Nova and her parents 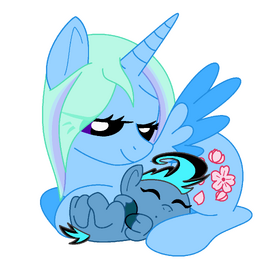 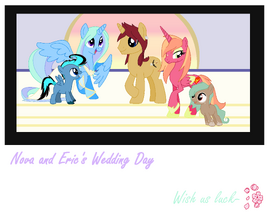 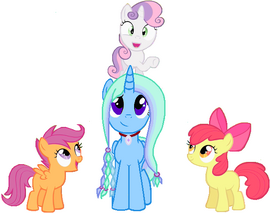 Nova Starlight and the Cutie Mark Crusaders.
Add a photo to this gallery
Retrieved from "https://bronies.fandom.com/wiki/Nova_Starlight?oldid=186299"
Community content is available under CC-BY-SA unless otherwise noted.