Paisley is a pale blue, almost white, pegasus mare. Her flowing mane is turquoise with pale turquoise streaks. Her eyes, rounded like Fluttershy's, are a brilliant orange. Her cutie mark is a flower. She is a student at Canterlot High as well.

At Canterlot High, Paisley is part of the Eco Kids group, with Starlight, Sweet Leaf, Green Cycle, and Captain Planet. The Eco Kids do environmental projects together.

Paisley is a very quiet girl. Passionate about her flowers, she is described as being kind and helpful. She may be impulsive at times, but Paisley's always ready to lend an ear.

Paisley has a die-hard crush on Valhallen (called Drummer Stix on this wiki.) She refuses to admit it, but it's obvious to anyone around.

Like everyone else, Paislet went to the Fall Formal. She wore a yellow v-neck dress with ruffles and a "moderate apple green" waistband. Her boors were the same apple green with yellow and brown accents. Like all the girls, she wore a necklace with her cutie mark on it.

Paisley was part of Captain Planet's band, the Planeteers. She played the maracas. Unfortunately, they lost to Flash Drive in the first round.

Paisley is a rollerblader in the Friendship Games. At first, she was very clumsy, but after a while she got the hang of it. 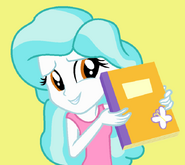 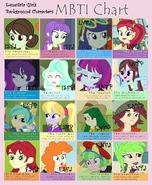 In the back, next to Sweet Leaf 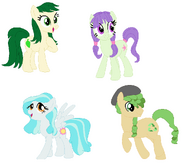 Just scared now.
Add a photo to this gallery
Retrieved from "https://bronies.fandom.com/wiki/Paisley?oldid=161924"
Community content is available under CC-BY-SA unless otherwise noted.