Start a Wiki
"Ehem, Excuse me, madam. Music is life, we can't enjoy our life without them. You can't say "music" was just a thing. I mean, you heard "music" before, right?"

— Philyra to somepony that hates music.

Princess Philyra is the princess of the Harmony Kingdom. She is betrothed to a prince stated by her mother, the queen. She speaks in a British accent or her accent is proper.

Her name was pronounced, PHI-LIRA.

Princess Philyra is sweet, but always proper, and always hearing music. She believes music is peace, life, gift. She never stops loves music. As stated by the ponies, she quickly forgives a pony but she teaches them a lesson. Princess Philyra sometimes is stubborn, but a loving pony, she loves animals like Fluttershy. She has a strong dislike to those music haters, and always accuse them.

She is a well-mannered pony, as stated by her subjects.

She is also studious, she studies or reviews anything, when she was a filly. When she was a foal, she gained her love of music when her father played a lyre, she was so overjoyed when he played that, but when she discovered Eris playing a harp, she quickly fell in love with him.

Also, she can't hide her enthusiasm.

"Being a princess was a hard work if you ask me. You have to follow all the royal rules and have so many work to take care of."

Princess Philyra is the princess of the Harmony Kingdom or the Lands. She follows the royal rules there but sometimes screws or disobeyed. For her future, her mother scheduled a marriage or engagement for her, because she will be the next heir of the throne, if she beaten (not physically) Princess Aika.

Philyra's love interest was Lord Erismonia. However, her mother, the queen, forbid this. He is a lord, but her mother is close to her "future-husband"'s parents. But, Princess Aika stated that, if she was the queen, she would accept Eris to marry Philyra someday, and her mother replied to her that, if she was only a queen like her.

They showed romantic gestures toward each other. They have been kind pushed together and although Eris may appear distant at times with Philyra. Being the smooth romanticist he is, he'd show his affections to her through romantic gestures like midnight meals on a castle balcony, and all those romantic things.

Philyra's love for music is eternity. You can see her always playing music, expressing her sadness, being inlove, happy, being excited. She also plays violins, pianos and more instruments.

Philyra always play music, like, she is playing right now.

Though that may seem distant, they still have interests, care for each other. They showed romantic gestures toward each other, they had their first kiss in the castle balcony when they are having a midnight meal. Her mother forbid them to be so close for each other, and love each other. She only allow them to see each other after Philyra was married to an unknown prince.

So, the queen trap Philyra in her room. Her mother loved her so much, but she doesn't like her to near Lord Eris again. Philyra can't even eat, drink or even sleep without seeing her beloved Erismonia. She tried anything to make her way out by breaking the door, but it was no use. There was guards who are guarding her from outside. Philyra was just getting weaker and weaker until she sees him.

Worried about her daughter's health, Lyric quickly let her see Erismonia for just a hour or a minute, they talked about them, Lord Erismonia said that, she shouldn't let herself getting weaker, because that's not the Philyra he knows, Philyra cried after he left. After, Lyric quickly make her drink a "sleep potion", so she wouldn't have "tantrums", but she ate or drank that day.

For what Eris told about them, he said that she needs to stay strong and believe. Lyric told Eris that, after Philyra's wedding, he may see her. Philyra, currently, is staying strong and believing in herself but deeply inside it was full of sad, miserable, she always feel that she is dead without Eris by her side.

"How come Music is a bad thing for our life?"

— Philyra asking to a somepony.

"I object my mother's decision, being betrothed to somepony I don't know."

"How come mother will see us? I really put sweat on this uhm.. what do you call this? Ah, hut."

— Philyra while banging the door with her hooves.

"I don't want to be betrothed, mother. Do you want your daughter to be sad and miserable?" 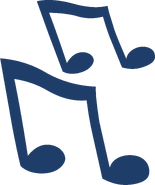 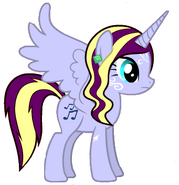 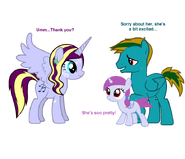 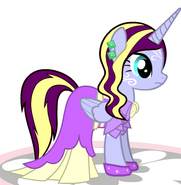 Philyra's Wedding Dress
Add a photo to this gallery
Retrieved from "https://bronies.fandom.com/wiki/Princess_Philyra?oldid=181991"
Community content is available under CC-BY-SA unless otherwise noted.