Start a Wiki
Quartz Midnight is the son of Lord Erismonia and Princess Philyra, he was the next heir of the throne, he has a sister named Amethyst Dusk.

He is regal, and always proper like his mother, he enjoys music quite well too. Despite being a "prince", he always wanted to be a king, but in the future he will be betrothed, as they're following the royal rules.

Quartz does like animals, and is a whisperer to all of them. He also tend to sing tenor-ish, but he sings only in a private place (like in bathrooms, comfort rooms, bedrooms etc.), but whenever Amethyst is around, and she wants to sing with him, he agreed quickly.

He sees his father 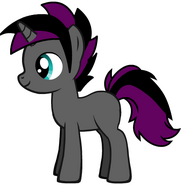 Quartz's Original Photo
Add a photo to this gallery
Retrieved from "https://bronies.fandom.com/wiki/Quartz_Midnight?oldid=116431"
Community content is available under CC-BY-SA unless otherwise noted.