Ribbon Chaser is a white pegasus. Her mane and tail are pink and orange with black roots. Her cutiemark is a red ribbon bow. Her eyes are green. She's a Ponysona based on a girl named Amanda.

Ribbon Chaser has a red bow as a cutie mark. Her special talent lies in crafting various things. She likes to make hair pieces and jewelry the most. She's also very good at singing and drawing.

"The funny thing is, she started her job before she got her cutiemark. She was surprised, to say the least. She could sing, she could draw, she could dance, but no cutiemark had appeared. She'd given up, until one day when she started messing with some of the materials that had spilled out of one of her packages. A bright red ribbon, along with several other crafting supplies. She started to work with the spilled contents, pulling here, tying there, until she was left with a beautiful hair bow. The first thing she had every crafted with her own hooves! Ever since, she's been making countless creative things from hair bows to sculptures to jewelry, and everything in between."

This pegasus works for the "Picture Perfect Projects" delivery service. She delivers crafting materials throughout Equestria, but her main deliveries are in Ponyville. Her favorite customer is Rarity.

Although Ribbon Chaser's parents are currently unknown, they are known to have been normal pegasus ponies. She has lived a normal life. Flight school, Miss Cherilee's class, and has many friends around Ponyville.

Ribbon Chaser's personality is outgoing and cheerful. She easily fades into the background sometimes, but she always has something to say. She gets lonely very easily, but brushes it off nonchalantly.

"She is an outgoing pony, although rather shy when there are a lot of new ponies. She's very daring and stupid, in a good way. She's always the first to jump into an adventure, and always the last to have her head hit the pillow. She is very insecure, but she plays it off like she's a rockstar. She's a leader, but sometimes she's lazy, and just follows."

She has been the mane focus of one fanfic called "Bright" where she is friends with a male Stallion named Espresso, and she makes friends with another pegasus pony named Lime Shot. 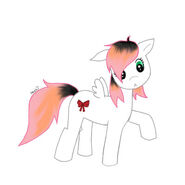 One ear up, one ear down. 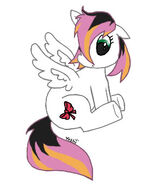 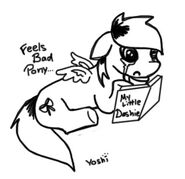 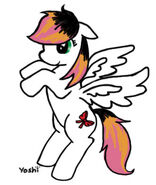 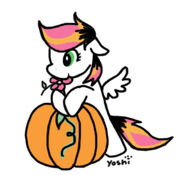 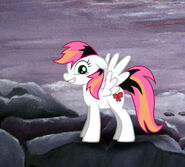 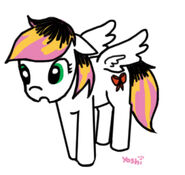 Add a photo to this gallery
Retrieved from "https://bronies.fandom.com/wiki/Ribbon_Chaser?oldid=33688"
Community content is available under CC-BY-SA unless otherwise noted.