Riff Wrath is a male Bat Pony and the head of the Enmity Organization. He is the arch-enemy of Sir Sheath and the rest of the Steed 6.

When Riff Wrath was first made, he was meant to be a evil force to balance out all the good in Equestria. He first started out as a unicorn Steed Knight named Sir Nova, who went mad performing his life-threating duties. Then his storyline changed overtime to "Professor Nova", an expert of theoretical magic and a practitioner of Black Magic, different from regular unicorn magic in so many ways.

Then a thought occured that this new villain would be much lighter for the show and would not be despised and threaten like the major villains. So his character was redesigned as a funny, intelligent, bumbling villain who sometimes socializes with his enemies before battling them, and can make appearences throughout the series.

So Nova was reimagined as the bat-winged alicorn, "Riff Wrath", whose personality was based off of the character Siegfried from Get Smart.

Riff Wrath was born as a male bat pony, who lived in "deep caves inside mountains", along with several other bat winged Pegasi. Riff Wrath always possessed a desire for power and glory, during his time at home.

One day, Riff Wrath got tired of his home and left to see the rest of Equestria, and then encountered the Enmity Organization. Seeing his potential, the Enmity offered him a chance to work for them and grant him power as he had always wanted.

Liking the thought, Riff Wrath accepted the offer and joined Enmity, and eventually became one of their greatest members.

Riff Wrath is a master criminal who crossed pathes with Sir Sheath and his gang hundreds of times. Everytime he comes up with an evil plan, they show up and try to stop him.

He is fully-trained to fight when necessary and he does a little magic. His chief henchman is a half-witted Changeling named Xeno.

Riff Wrath, like other Enmity agents, is not a fan of Princess Celestia. He prefers evil deeds over compassion and friendship. He doesn't like it when the princesses, their subjects or the Steed Knights of the Chess Table ruins his plans, but likes the challenge.

Riff Wrath is short-tempered, bumbling, and treats evil like a lifestyle. However, he doesn't hurt anypony, unless they get in his way. He usually scolds Xeno on his stupidity. He is also known for going into short outbursts of rage, and quickly calms down afterward as if nothing happened.

Riff Wrath is like a dark reflection of Sir Sheath and was able to form a friendly-enemy relationship with him. He is shown to like Sheath, even though they are enemies and despite his sworn hatred towards Sheath, he seems to have a somewhat soft spot for him.

In Equestria Girls: My Noble Steeds, the human version of Riff Wrath started smiting with Adagio. When they first met, he was threatening her. But then it is revealed to be a tease.

Adagio had no interest in him at first, but then Riff Wrath got anger and start threatening her. She never felt fear in that before, and found it attracting.

Riff Wrath have considered Sir Sheath as his arch-nemesis. He was the only one to ever match-up to Riff's fighting techniques. Despite being mortal enemies, they both found respect for each other.

Riff Wrath is the head of the notorious Enmity Gang.

In Equestria Girls: My Noble Steeds, Riff Wrath is the head of the notorious Enmity Gang.

He first appears by dressing up in Sheath's clothes and helmet. As they confront him, Sheath recognized his moves and expose him.

He wields Equestrian Magic which gives him bat wings, heightened senses, and a bat shriek.

"Is she for real?"
"Frightening, isn't it?"
— Riff Wrath and Nimbus Quasar about Pinkie Pie

"Well if we're playing with fire, then I say 'Let it burn'."
— Equestria Girls: My Noble Steeds

Riff Wrath is a male Alicorn pony with bat-like wings and an agent of the Enmity Organization. He is the arch-enemy of Sir Sheath, Nimbus Quasar, and Bright Idea. He is also Trixie's boyfriend. 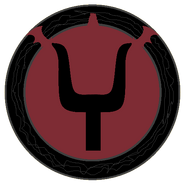 Riff Wrath's pitchfork
Add a photo to this gallery
Retrieved from "https://bronies.fandom.com/wiki/Riff_Wrath?oldid=185022"
Community content is available under CC-BY-SA unless otherwise noted.