Rose Thorn is an Earth pony who lives in The Everfree Forest with her daughter Crimson Flower and she works at Zecora's hut creating potions.

Rose Thorn is a very calm and withdrawn pony, only trusting her family and a few close friends.  She is a lot more relaxed since having Crimson when meeting new ponies, she used to frown upon meeting them. She mostly enjoys wondering around The Everfree Forest rather than entering the bustling city of Ponyville. She is also extremely protective over her family and friends; she has a sharp tongue if any of them are ill spoken of.

Rose Thorn is a hardworking yet sly pony who has the knack of mixing up cruel potions for her ex-ponyfriends . She will force herself to work all night if she has to just to get a potion right. Once she starts something she will be very determined to finish it, without starting another task until that first one is complete.

When Zecora became ill, the only person she had known to continue her work was Rose Thorn. She was left alone to look after her house as Zecora slept so she left Zecora's chores til after she completed her own business.

As she found she had nothing left to do, she started on Zecora's chores collecting various herbs and fruits from the Everfree Forest. Her journey was long and it was wet and cold but she had to complete what she started. When she returned Zecora was so pleased and grateful with her help that she let Rose Thorn work along side her. Rose Thorn never thought that she would be so happy with what she had done for her. She started to loosing up around Zecora but still kept walls up when it came to trust.

This potion was her very first potion that she made to be successful, The Transmogrification Potion. This potion is used to transform Rose Thorn into whatever creature she likes. She first made this just before getting her cutie mark and made it several times after, mainly for Nightmare Night.

One of the most recognizable transmogrification was when she used it to change her mane into the snakes of Medusa. This was the first time she celebrated Nightmare Night and was complimented by every pony

Not so much a skill, but rather a unique part of Rose. Her hair grows extremely faster than the average pony. The first time she had it cut it grew back to the floor within a week. Since then she still regularly gets it cut but you would never tell.

As soon as Rose took an interest in potion making her parents left her in the care of Zecora.  They never got on well either. Rose kept making cruel potions which sometimes would make a pony so ill they would be in bed for weeks. Zecora disagreed with this completely. One day while making one special potion using thorns from a blood Rose, she got her cutie mark as this was going to be her most famous potion to ever be made. Here is where she got her cutie mark, a deep red rose with thorns down the stem.

She didn't have a very pleasant upbringing was left alone for hours as a filly and was always locked up in doors. Rose never had the chance to play with other ponies. She lived too far from Ponyville and her parents would never let her go there on her own. She used to play with her sister, Lemon Zest, before Lemon got old enough to leave the house on her own.

Rose Thorn lived in The Everfree Forest along with her mother and father as a young filly. Her parents never got along with each other always shouting and arguing.

Lemon Zest is Rose Thorn's older sister. She was once very close to her sister but as time went by Lemon moved away to Ponyville. She only rarely sees her sister but she able to see her neice more.

Crimson Flower is Rose Thorn's daughter. As soon as Crimson Flower was born several years later in the story, Rose almost completely changed her attitude towards strangers and slowly started to learn to accept the world. She is very protected of Crimson still, but that's just because of mother's instinct . As Crimson grew up she never wanted to same life in the Everfree forest so took up being an apprentice Florist in Ponyville. She gets taken back home everyday by Waterlily and her Mother. She also look up being a Florist as she loved the smell of fresh flowers.

Rose first encountered Ruhig Fortepiano when he first came to Ponyville searching for unique ponies for inspiration for his music. Whilst wondering around the sights of Ponyville he came across The Everfree Forest which seemed to be full of inspiration for his eyes and mind. He met Rose Thorn while she was out collecting ingredients for a potion. As Ruhig was new to The Everfree Forest he was slightly naive in thinking he could try out some berries nearby. Rose noticed the berries and stopped him before he ate one. She explained in fine detail all about the berries he was to eat, that they were poisonous. In amazement Ruhig found great interest in Rose about her knowledge in her potion making talent. Rose was at first very reluctant to make conversation with this stranger but after hearing about the work he does as a composer in Cloudsdale she slowly began taking an interest. After this meeting Rose and Ruhig meet for time to time in Ponyville. 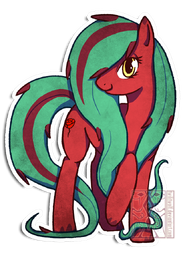 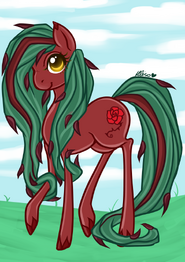 Artwork by Chaos Illustrations
Add a photo to this gallery
Retrieved from "https://bronies.fandom.com/wiki/Rose_Thorn?oldid=144884"
Community content is available under CC-BY-SA unless otherwise noted.