Royal Wonder Red known as Royal Red is a Zebracorn (Half Zebra Half Unicorn) OC designed by (CoryCodeRed) for a web comic series entitled My Little Pony: The Power of Teamwork. (Series in writing process)

Please do not use my OC's in your stories without first discussing it with me. Thank you. -Cory Hall

Royal Red is the son of a Zebra Princess named Milia Amiirad and a Unicorn adventurer named Red Stars. He was born in the Zebra homeland, but at a young age Royal moved to Manehattan with his father. Being half Zebra Royal Red never fit in with the other ponies, and to make matters worse he never got a cutiemark which left him at the end of many criticisms and jokes.

Once he was old enough Royal Red traveled Equestrialooking for his place, often in desguise to hide his stripes, hoping to one day get a cutiemark and be welcome and accepted. After traveling for a few years he had almost given up until he heard that the Crystal Empire had reappeared, extremely curious and excited he moved there as fast as he could and found the pony's to be very nice. Not long after moving he opened a buffet he named "The Royal Wonder Buffet", where he used his knowledge of medicinal plants and herbs gained from his time with his mother to create a menu that was not only delicious and healthy but beneficial to his customers.

After a big match between Ponyville and Appleoosa the appeal for Buckball Spread across Equestria fast. The Crystal Empire having only reappeared recently had no knowledge of Buck Ball until this newfound fame for the sport reached their doors with the announcement of the first official Equestrian Buckball League Championship.

Soon the interest in Buckball was as strong and after receiving many requests to establish a team for the empire Princess Cadence decides to ask Twilight to help her people set up the Crystal Empire's first official Equestrian Buckball League team, The Crystal Companions.

Twilight shows up with a rule book written by Applejack and proceeds to start gathering pony's that want to tryout for the team. After an eventful day of tryouts Twilight and spike stop to eat at the empire's newest popular restaurant where they meet Royal Red who has been an avid fan of Buckball for a few years. With his help they manage to put together a team just in time for the season's start but it didn't start out smoothly as Royal Red has a hard time believing he can accomplish much. Done with their work on Ponyville's team Applejack, Rainbowdash and Rarity head to the Crystal Empire to lend a hoof to Twilight, bringing with them the cutiemark crusaders who begged them to go so they could see the Empire.

Apple Bloom, Scootaloo, and Swetie Bell discover that Royal Red has self-confidence issues and with their help Royal Red comes to believe in himself and realizes that he was meant to teach and coach others. With Royal Red serving as the coach and manager of the Crystal Companions and the Empires team set up in time for the first season, Pinkie Pie and Fluttershy arrive and help throw a celebratory party before they all return to Ponyville, leaving things in Royals capable hooves.

Royal Red is an easy-going very intelligent pony that loves to learn and exchange ideas with other pony's. He enjoys being a teacher/coach and working in his restaurant. Traveling and reading good books are his favorite hobby's. While his temper can flair if pushed to far Royal Red has never and would never harm another pony unless he absolutely had to.

Royal Red has picked up many skills in his life such as horticulture, survival tactics, cooking, counseling, swimming, and climbing; most of which he learned from his mother then expanded on through self-study.

His major talents include teaching and magic use. Having read many, many books in his lifetime and enjoying observing and listening to others he has an easy time understanding different points of view and finding a way to explain things to other pony's. Being taught how to use magic by both his mother and father as well as having studied a lot himself he has gained decent power in magic.

Royal Red specializes in and uses most frequently the following magic: 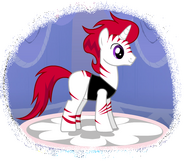 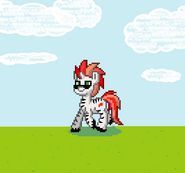 Royal Red in Pony Town
Add a photo to this gallery

Royal Red's first cutiemark design was a dodge-ball with fire around it.

The Royal Red in pony town picture was edited to have stripes and a background.

Retrieved from "https://bronies.fandom.com/wiki/Royal_Red?oldid=181270"
Community content is available under CC-BY-SA unless otherwise noted.