Ruby is a female Pegasus pony, a Guitarist of the Destroyers, and the younger sister of Lightning Rocks. Ruby is also one of the main characters in My Little Rockstar: Metal is Magic.

Her coat is deep burgandy, her mane and tail are black with deep violet highlights and her eyes are sky blue and based of Zecora's eye design.

Ruby lived with her parents and brother in Las Pegasus for the first few years of her life. Her parents decided to move to Ponyville to be closer Ruby's grandparents, now retired. This took place before Ruby and Lightning had started school and were enrolled into Ponyville's school. There the twins met and befriended a filly named Rosie. The three remained good friend all to adulthood. Rosie shared a similar interest in music and the three would take music lessons together while in pony school. When Maxx came to live with Rosie, Ruby and Lightning took well to him, adopting him like a younger sibling they never had.

One day while out with Rosie in the Everfree Forest, Ruby, Lightning and Rosie found a changeling named Zino who was being attacked by Timberwolves. They managed to save him and brought him back to Rosie's house to treat his wounds. Unable to return to his hive, Zino remained with Rosie and over the days, Ruby and her friends slowly befriended the changeling.

Take note: I know none of these artists would exist in the MLP universe, but I thought It'd flesh out her personality a bit if the reader knew what kind of music she liked

The guitar is deep red with tinted black dials and cream colour pick up switch (thats the big white thingy on the guitar shown). 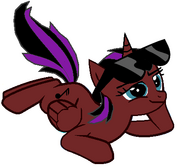 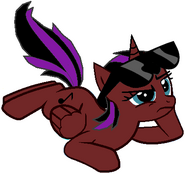 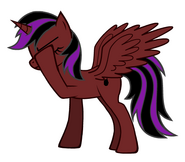 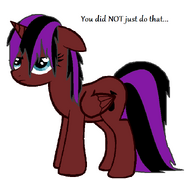 Ruby trying out some headphones

Ruby in Equestria Girls
Add a photo to this gallery
Retrieved from "https://bronies.fandom.com/wiki/Ruby_Rocks?oldid=142912"
Community content is available under CC-BY-SA unless otherwise noted.