Six Mon Coin is a pegasus pony of average height and weight, though with a somewhat leggy build. His coat is a pale peach color, almost a pale skin-tone color. His mane and tail are a little wild and unruly, and an off-red-orange color. He has heterochromia, his left eye completely black with a white pupil and his right eye white with a black pupil. Due to childhood injury, his wings are metal prosthetics. He has limited control over them, mostly dealing in how they move and adjust how they handle while he flies, but he cannot fold them. His cutie mark is the Japanese Six Mon.

Six Mon Coin is generally a quiet pony. He is more likely to be seen and not heard, speaking up only when he feels the situation warrants advice. He dislikes being in large crowds, and is very self-conscious of his prosthetics. He does not seem to mind comments about his eyes, as he has gotten stares and questions since he was a colt. He can be stubborn, especially if he is standing up for what he thinks is right. Six Mon Coin has a strong moral compass, and a firm sense of right and wrong. He has no problems in standing up for either something he believes in, or someone who needs help making their stand.

The Japanese Six Mon was worn by feudal warlords and samurai who were not afraid to die at a moment's notice. At the time, six mon was the amount that the dead were buried with so they could pay the Ferryman into the afterlife. The same six coins make up Six Mon Coin's cutie mark. Six's special talent is showing absolute courage in the face of sheer danger and despair. Such a shy pony does not normally need to invoke his talent, but when he does, his demeanor changes to that of a firm, serious pony who does not stop until justice has been served or the wrong party has backed down or fled.

Six Mon Coin was born in Cloudsdale to two perfectly normal pegasi parents. A shy colt, Six had a problem making friends, but no problems learning how to take to the skies as a proper pegasus should. He loved to fly, and showed no fear in his first leap off the clouds with his little wings flapping madly to keep him airborn. Because of his normally shy demeanor, however, he received a fair amount of ridicule from his peers. Six tolerated the teasing towards him, but he would not stand for teasing of what few friends he had.

It was during one of these little tiffs that Six Mon Coin simultaneously earned his cutie mark and lost his wings. Standing up to a gang of older pegasi and griffons for picking on a friend, Six was set upon for insulting many of them. Being a smaller colt, Six was beat rather brutally, his small wings being crushed beyond repair in the fight. His parents were faced with the choice - have his wings amputated or have their son live with permanently crippled wings for the rest of his days. His parents decided that it would be best for him to have his wings amputated.

Six was devastated when he woke up from the surgery. For a while, he was watched constantly so he did not fall from the sky. One of his parents was contacted by an earth pony, and after discussion, the first pair of prosthetic wings were made for the small colt. He grew up needing them remade and resized, but with practice, he was able to fly over short distances. He was not as agile as other pegasi, but he could fly, and that is what mattered to him.

1 - When searcing for either 'Japanese Six Mon' or 'Six Mon Coin' on google, pictures of Six Mon Coin the pony appears first in the image search. 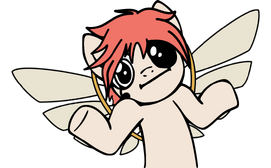 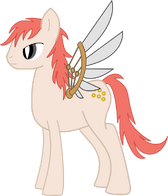 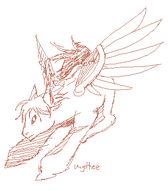 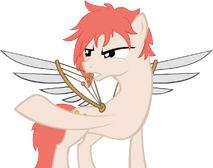 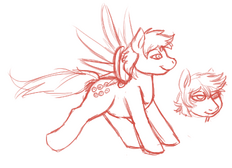 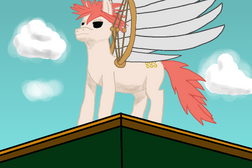 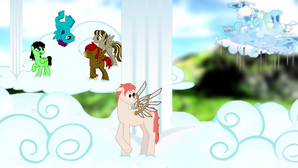 Hiding from his peers (by Psyche Hawk) 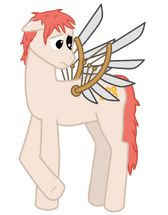 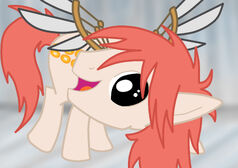 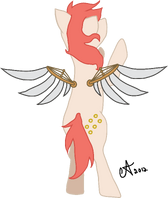 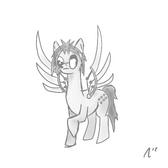 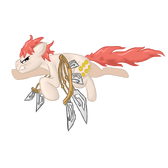 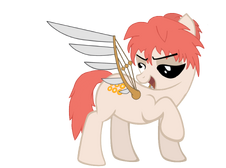 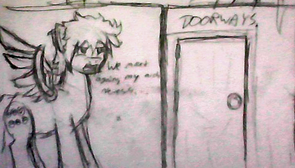 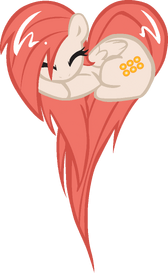 Six heart-pony by Doctor Anon
Now with text.png
Just some Six for fun
Add a photo to this gallery
Retrieved from "https://bronies.fandom.com/wiki/Six_Mon_Coin?oldid=107527"
Community content is available under CC-BY-SA unless otherwise noted.