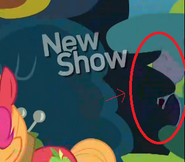 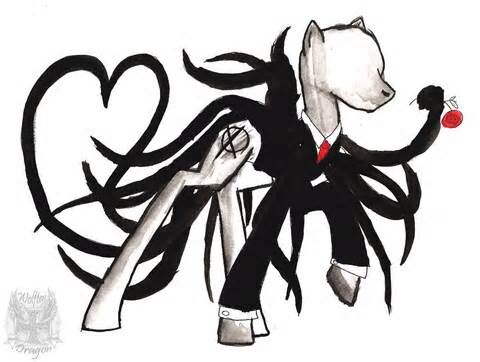 the slender pony is a mythical creature that lives deep in the everfree forest and preys on anypony mad enough to go out there.

The slender man meme started around 2010-11 time when the first slender man photos appeared on the "something awful forums". With the rise in MLP's bronie fandom and increasing interest in slender man it wouldn't be long before someone put 1+1 together to create slender pony.

Much like the 'human' slender man he has the capabilities to abduct ponies, mainly foals and fillies, however nopony knows what for. He can also command extra limbs to wrap up prey or blend in with forest enviroments.

The creature is tall and thin. Most eyewitness accounts describe a tall pony about as, if not taller than Celestia herself, often described as wearing a black suit, bow/tie and having a "blank face". The extra limbs that protrude from the creature's back are long thin and black like the 'suit'.

Community content is available under CC-BY-SA unless otherwise noted.
Advertisement