Snow Gem is a smart and humorous female white unicorn pony from Ponyville. Snow lives in Ponyville with her roomate and best friend Sparkle Sky. She is the arch nemesis of Comet Shock. Snow is part of the Elements of Love and weilds the Element of TBA.

Snow Gem is very smart. So much in fact that sometimes she seems a rather intimidating pony to approach. She takes an interest in sciences mostly. Especially the science of weather... As she is a weather pony.

She has light purple and light pink hair, it's very curly.

Snow Gem has spent her entire life in Ponyville. She was top in all her classes as filly, and often she was teased because of this fact. When Sparkle Sky started going to the ponyville school, she stood up for Snow and ward off the bullies with her very optimistic nature. The two have been friends ever since.

Snow Gem is a very studious pony who in the course of her time she has mastered many spells. Though she is not the most powerful of the Elements of Love, she comes a close 3rd.

In My Little Pony: The Elements of Love - Equestria Girls: Storm Rocks, Snow Gem's human counterpart truly lives up to her "Just because I'm smart doesn't mean I can't be cool" attitude. Snow Gem plays a guitar or bass throughout. She proves to be a skilled guitarist out of the two instruments, claiming that Will Farquarson taught her all she knows. She is shown to enjoy playing the guitar in a flash back scene.

Crescent and Snow are good friends. They're intelligence clash a bit though.

Xethon and Snow's friendship can sometimes become rather awkward. But they are willing to protect one another if they should come in to contact with danger.

Sparkle and Snow are filliehood best friends and still are. They get a long very well even though their personalities are completely different.

Diamond is a rather full of herself pony and is threatend by Snow's intelligance.

"Being smart doesn't mean you can't be cool."
- Snow Gem 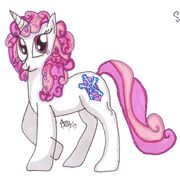 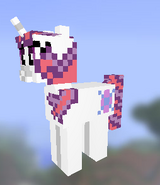 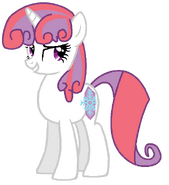 Old look
Add a photo to this gallery
Retrieved from "https://bronies.fandom.com/wiki/Snow_Gem?oldid=177628"
Community content is available under CC-BY-SA unless otherwise noted.