Soda Ponies are a subculture of ponies.

They are a subculture that enjoy just being themselves. Some might live underground, others in the sky, and some others in normal places like Ponyville and Manehatten. Most of the ponies have spiky manes and tails, others will have manes and tails that are smooth to the touch. They're mainly pegasi, some are earth, and rarely ever will there be unicorns.

Dr Pepper Soda Ponies are normally dark red in color and usually have darker red manes and tails. Rarely, some will have pale yellow or dark purple manes. This occurs more often in the females rather than the males.

Coke Soda Ponies are usually dark brown or dark red in color, and have a darker red or darker brown mane and tail. Some are bright red or white in color. They have a rivalry with Pepsi Soda Ponies.

There is little difference between the Coke and Pepsi Soda Ponies in appearence, but the Pepsi ponies can range in red, white, AND blue. They have a rivalry with Coke Soda Ponies.

Sprite Soda Ponies range in many shades of green, blue, and yellow. Some can be white or silver. They're close friends with the Mountain Dew Soda Ponies.

Mountain Dew Soda Ponies range in shades of neon green. Some can be pale blue-green or silver. Rarely, some will be bright red. They're close friends with the Sprite Soda Ponies.

Root Beer Soda Ponies range from shades of dark brown. The head male of the colony says that they dislike the Coke and Pepsi Soda Ponies for their arrogance and rivalry.

Fanta Soda Ponies range in shades of orange, purple, green, yellow, and red. They claim to know about the Royal Tru Soda Ponies and say that they're "practically buddies".

Not much is known about the Royal Tru Soda Ponies, but it is said that they are alicorns that range from shades of orange, purple, yellow, and red and be two colored. It is also said that the females' manes are spiked at the end and will draw blood if somepony ought to touch it. The Royals live away from the other Soda Ponies. The Fanta Ponies claim that they know the Royals. This might actually be true, since a Fanta Pony came walking with a red Royal Tru Pony.

Here's a gallery of Soda Ponies.

A Mountain Dew Soda Pony when they've had too much to eat... 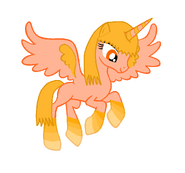 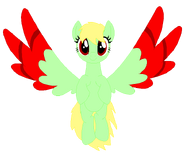 Mountain Dew pony by .Kitsune
Add a photo to this gallery
Retrieved from "https://bronies.fandom.com/wiki/Soda_Ponies?oldid=156477"
Community content is available under CC-BY-SA unless otherwise noted.