Start a Wiki
Swift Skies is a female Pegasus pony and a former member of the Wonderbolts. She is the captain of the aerial acrobatics group, the Thunderays.

Swift Skies' design was inspired by the character Kimmy from the Sym-Bionic Titan television series.

Swift Skies was a member of the Wonderbolts alongside Spitfire, Fleetfoot, Soarin, and Surprise. However, unlike the others, Swift was quite boastful and overconfident in her flying skills, believing herself to be the best flier on the team. As time went on, Spitfire repeatedly told Swift to stop being arrogant and "pushing [herself] in the wrong direction" as a Wonderbolt, but she refused to listen.

At one point, one of Swift's aerial stunts caused her to accidentally crash into Surprise in the air and injure her wing, causing Surprise to fall toward the ground, but the other Wonderbolts managed to catch and rescue her.

Afterward, Spitfire berated Swift Skies for her utter disregard for the safety of her teammate and recklessness and kicked her out of the Wonderbolts. As she left, an enraged Swift swore revenge on Spitfire and her former teammates.

Swift Skies leads her own aerial squad called the Thunderays, rivaling the Wonderbolts.

Swift Skies is shown to be arrogant, boastful, and overconfident. She is very resentful toward the Wonderbolts for kicking her out of the team and has a long-standing rivalry with Spitfire. She is also harsh when training the members of the Thunderays, usually telling them to keep improving their moves.

As a former member of the Wonderbolts, Swift Skies is a talented flier, able to perform amazing flying feats in the air. She is also able to focus on several things at once while in flight.

As the captain of the Thunderays, Swift Skies is shown to have a good relationship with her fellow members and will usually tell them what to do.

Swift Skies has a long-held rivalry with Spitfire and harbors a bitter grudge against her for kicking her out of the Wonderbolts.

As a member of the Wonderbolts, Swift Skies used to have a crush on her fellow teammate, Soarin. However, after being kicked out of the team by Spitfire, Swift is shown to have lost interest in him.

As a Wonderbolt, Swift Skies believed she was the best flier in the squad and that they were nothing without her. After being kicked out from the team, Swift swore to get revenge and eventually formed her own team, the Thunderays. 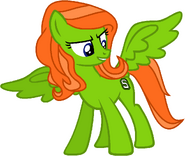 Profile picture of Swift Skies.
Add a photo to this gallery
Retrieved from "https://bronies.fandom.com/wiki/Swift_Skies?oldid=186354"
Community content is available under CC-BY-SA unless otherwise noted.