Start a Wiki
Tech Savvy is a wacky unicorn inventor and the best friend of Sir Sheath and Nimbus Quasar. He also has a lab rat named Costello. He represents the spirit of hope.

Born and raised in a junkyard in Bucklyn, Young Tech Savvy was the son of Blue Print, a contracted blueprint sketcher, Steam Pump, a unicorn who builds crazy inventions from the refuge of the junkyard. Young Tech was inspired by his father to become an inventor himself.

While testing a vegetable chopper he recently built, he accidentally cut off a piece of his left ear.

One day, he met a young street performer named Nimbus Quasar, who hopes to be a true performing artist. The two became best friends and were inseparable ever since.

As stallions, Nimbus and Tech started working together on each others work. Tech Savvy would develop machines and stage equipment for Nimbus's performances, and Nimbus would helps Tech with his inventions.

One day, two met Sheath on one of his training missions on becoming a Steed Knight of the Chess Table. After helping out, the three became friends and go on adventures together. Nimbus Quasar and Tech Savvy were even there for Sheath's knighting.

The trio then moved to Ponyville and made friends with the Mane 6. Tech Savvy was given a home with a big shack, where he is free to make his kooky creations.

Tech Savvy is a silly, but brilliant inventor who can create any wacky thing that pops into his head. He hopes that his crazy inventions will be part of the next century. Tech shares the same childish nature as Pinkie Pie. But unlike Pinkie, who simply tries to be silly, Tech Savvy is naturally being silly. Though he's got a carefree nature, he's not quite as random as her.

He would say the most awkward things that no other pony would expect to say. He response to the most outrageous statement in a humorous way. He is the comedic one in the Stallion Trio, and no one can tell if he's joking or not. Tech Savvy is the most open-minded of any pony. He believes the possibilities are endless.

He hoped that his inventions may one day be part of Equestria's future. Tech is very curious and very creative. Though not all his inventions are for the future. Sometimes he just makes crazy ideas because he can. He personally thinks Equestrian devices like megaphones, lanterns, and carriages are outdated. Though there are some old things he thinks are worth keeping, like books.

He can be a somewhat womanizer around pretty females, especially with the Mane 6.

Tech Savvy was originally named Neon Tool, and his cutie mark was meant to be a cross made up of a wrench and a screwdriver. He was given a neon night club color pattern for his love of electronics and machinery.

He has been known as "Bright Idea" for a while, until the discovery that the fans gave the name to a background character for Equestria Girls.

Tech Savvy can create anything that pops into his head, electronic or otherwise. He also has a knowledge of chemical, potions, and physics; if it serves his inventions any purpose.

He can use his magic to project 3D images.

He can even modify his gadgets to fit into what ever predicament he's in. Tech can even use the objects around him as parts. He mostly does this in the most dire of situations, and at fast rate as well.

Tech and Nimbus have been best friends since they were colts growing up in Bucklyn.

He would often share his scientific quarries with Twilight.

Tech is into the most up-to-date devices, while AJ is known to settle for old-fashion things. The two would sometimes debate about which is most suitable.

Both Tech and the Doctor would share their ideas and scientific findings.

Tech like the fact Plaid Stripes has lots of interesting idea. Some he adapts to his inventions. There seems to be a bit of a fondness between them.

In Equestria Girls: My Noble Steeds, the human version of Tech Savvy first bumped into Sonata and imminently developed a crush for each other. Despite Tech Savvy's kooky nature, she doesn't seen to mind.

Rainbow Dash [about Tech Savvy]: Next thing you know, he'll be making ways to give ponies fingers.
[Tech Savvy turns around wearing mechanical fingers on his hooves.]
Tech Savvy: What's wrong with stuff like that?

Tech Savvy: Pinkie Pie, you and your parties. All you care about is song and dance, and frolicking around.
Pinkie Pie: Well what's wrong with that?
Tech Savvy: You never take me with you.

Applejack: Is that a jalopy?
Tech Savvy: It used to be.

"'Just imagine it. No more harnesses, no more wash tubs, and especially, no more fireflies. It's time we all start moving forward."
— In IPony

"Hey, if you're planning on blowing my brains out, you're wasting your time."

"You know what your problem is? You think too small."
— To Twilight Sparkle

"Not to worry. He doesn't bite...people he likes."
— To Rainbow Dash about Nimbus Quasar in Equestria Girls: My Noble Steeds

"Sorry, mama. But the only fibers I'm interested in are fiber optics. That, and fiber for my health."
— To Rarity

Flash Sentry: What kind of gas done is run on?
Tech Savvy: Oh it doesn't run on gas. It's electric.
Twilight Sparkle: Electric?
Tech Savvy: Yeah. All my cars are electric. I have a soft spot for the environment.
Everyone: Oh.

"Give me your names, your identifications...and more importantly, your phone number."

In Equestria Girls: My Noble Steeds, Tech Savvy's human counterpart arrived from the train with human version of Nimbus Quasar, Right Wing, and Sketchette from the city for the weekend. He takes a mechanic shop class at school. 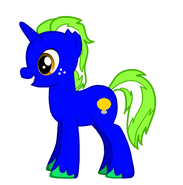 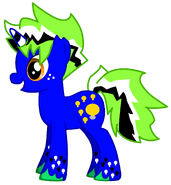 Bright Idea using the power of the Triskelion of Chivalry 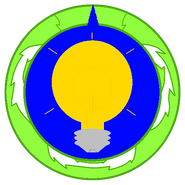 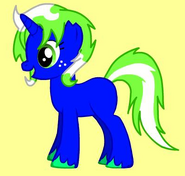 Bright Idea's genderswapped counterpart - Break Through
Add a photo to this gallery
Retrieved from "https://bronies.fandom.com/wiki/Tech_Savvy?oldid=184228"
Community content is available under CC-BY-SA unless otherwise noted.