The Mindstate Ponies are ponies that are incarnations of purely an emotion or state of mind. They're formed wherever there is a high enough concentration of that emotion/mindstate. The positive ones can spread their emotion intentionally. The minor negative ones can, too, but unintentionally. The major negative ones have a powerful magic that can screw with a pony's mind and cause them to unwillingly enter that mood/mindstate.

(More of these will show up in time)

ART OVERHAUL IN PROGRESS! Alongside new ponies being added (possibly), I am removing the pony maker images and replacing them with base dolls. There may be tweaks but for the most part, most of them will look very similar to how they did initially.

Ariden is the Mindstate Pony of Confidence. A very brash, arrogant stallion, he's extremely overconfident, which is his main trait. With just some pep talk and support, Ariden can give even the most timid of ponies enough confidence to get through whatever challenge is thrown at them. He is a light blue pony, with bright red eyes and a slightly duller red mane. He usually wears black bands around his legs.

His theme is Headstrong.

Kinai is the Mindstate Pony of Hyperactivity. She's a very bubbly, giddy pony that enters a sugar-hopped state if she eats or drinks anything sweet. Whether or not it has sugar doesn't matter. She is able to find the fun in anything, no matter how serious the situation is. She has a pink-and-red color scheme, with goldenrod eyes.

Her theme is Paffendorf. (The original, not the one with the Lucky Star sound clips added.)

Mika is the Mindstate Pony of Paranoia. No matter where she is, she is always nervous and glancing around in fear. She's especially jumpy in dark corridors or rooms. If you asked her how she felt at any time, she would always say she felt like she was being watched, even if she happened to be happy at the time. She is dark red, with a lighter red mane and blue eyes, usually with small pupils.

Her theme is Minecraft's 13.

Muraiko is the Mindstate Pony of Love, and among the strongest Mindstate Ponies in existence. She was formed on the very first Hearts and Hooves Day. She is a very kind, loving alicorn, who can also be kind of the Cupid of Equestria. She likes to search for a pair of ponies that she can detect will be a perfect match for each other. Then, with a little spark from her horn, she transfers their thoughts between the two of them for a few seconds. Once the two ponies realize they think alike, they fall in love. She is magenta, with a cyan-ish mane, and magenta eyes. Part of her wings are purple.

Her theme is Thousand-Year Solo.

Minna is the Mindstate Pony of Peace. She is usually at inner peace and likes to meditate. However, she is one of very few Mindstate Ponies able to act opposite of their mindstate, which is an allusion to the fact that peace is hard to obtain and hard to keep. Because of this, Minna is a weak Mindstate Pony- she has a hard time spreading her Mindstate. She is a silvery-white pony, with a blue mane and magenta eyes. She's also tiny. Very tiny. 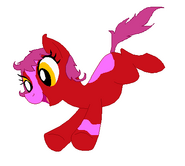 Mika
Add a photo to this gallery
Retrieved from "https://bronies.fandom.com/wiki/The_Mindstate_Ponies?oldid=56150"
Community content is available under CC-BY-SA unless otherwise noted.